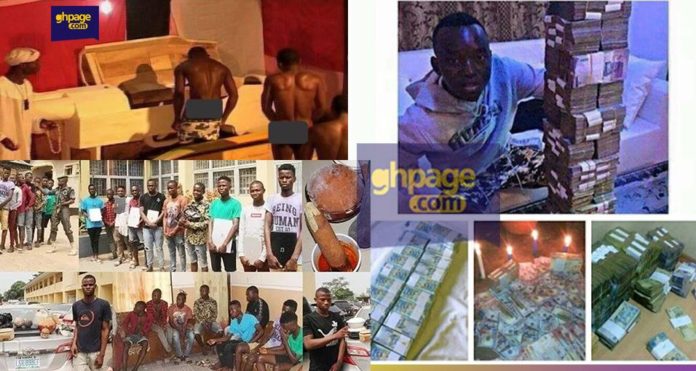 The Ghana Criminal Investigation Department has arrested all but one 12 boys who went to Universal Merchant Bank (UMB) branches across the National Capital to withdraw money collectively amounting to GHS326 Million.

The fraud boys (Sakawa) who comprised of Ghanaians and Nigerians were arrested by the CID through an ambushed operation when they went to withdraw the money which has safely landed into their various accounts from abroad.

SEE ALSO: 5 Diabolic Things ‘Sakawa Boys’ Do To Get Money – A Must Read For Everyone Especially Ladies

From what Ghpage.com has gathered so far, the boys [Name Withheld] received the money, GHS326 Million, from abroad but we can’t confirm from whom exactly and for what purpose.

According to the Bank, the fraudsters hacked into the Bank system, opened multiple accounts and transferred the huge GHS326 Million in small amounts into the accounts for multiple withdrawals.

Universal Merchant Bank (UMB) officials luckily found out and alerted the Criminal Investigation Department who ambushed and arrested the fraudsters one after the other as they go to the bank to withdraw the money.

But before the Bank took notice of the suspicious activities, an amount of GHS1 Million had already been withdrawn from the Bank in Dubai, United Arab Emirates at the Automated Teller Machines (ATM) using internationally accepted credit cards.

Out of the 12 fraudsters, 11 were busted by the CID. They have already been processed for court and are set to reappear at the court on 9th August 2018.

Ghpage.com is following the issue and will update you when there is any new development. STAY WITH GHPAGE.COM