Fresh case of coronavirus reported in Ghana at Korle-bu 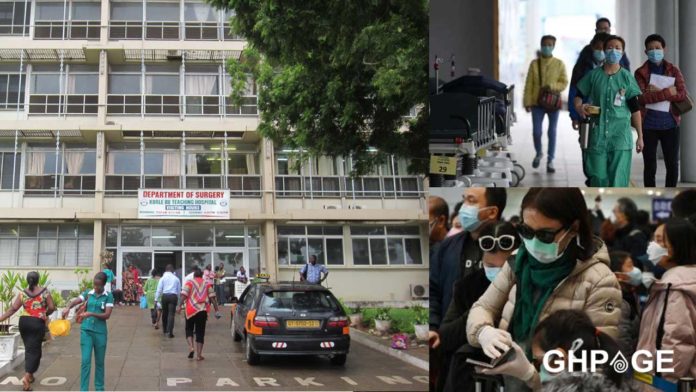 News reaching Ghpage.com news desk has it that the deadly coronavirus has finally found its way into the shores of Ghana after two foreigners reported at the Korle-bu Teaching Hospital.

The two, a Chinese and an Argentine who have been living together in the country for some days, have been isolated at the facility while blood samples taken have been sent to the Noguchi Memorial Institute for Medical Research (NMIMR), for further analysis.

Dr Baah explained that the Chinese left the home country for Ghana sometime in September 2019 while the Argentine, who was in Shanghai, joined the Chinese in Ghana in January.

“They’ve all developed some symptoms that fit the case definition [but] it doesn’t mean they have the disease,” he clarified.

He said another round of testing is expected to be conducted on the two nationals Thursday.

He explained that the patients initially visited an unnamed private facility in the capital and reported the condition and were directed by the medical staff there to report to Korle Bu.

Dr Baah wants the authorities to adequately resource health facilities for them to properly prepare to handle the situation as well as manage communication among health workers.

Earlier on the same programme, the National Coordinator for Port Health at the Ghana Health Service, Dr Dennis Laryea disclosed, health officers recently picked one person for testing after he showed symptoms of the virus at the Kotoka International Airport.

He said the individual was kept in isolation for about six hours while the result was being confirmed. Fortunately, he tested negative of the virus, Dr. Laryea added.

Also Read: Fantana spotted with Afriyie Acquah in a Night club in Turkey

“The gentleman wasn’t very happy but he understood that we were doing this in the interest of public safety,” he said.

The most common symptoms are fever, cough and shortness of breath. Some patients also reported sore throat and runny nose while others experienced diarrhea, nausea and vomiting.