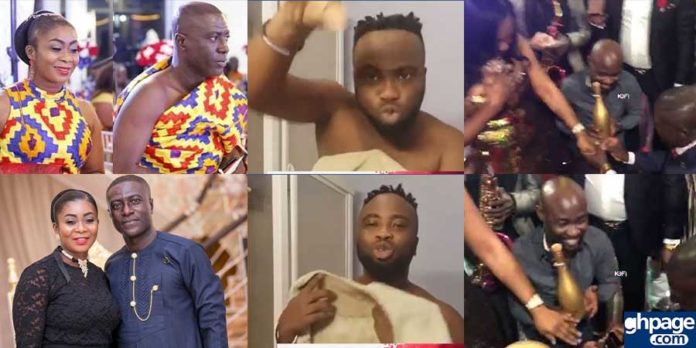 If there is one person who ‘took it personally’ after Captain Smart snatched now-estranged wife, Afia Pokuaa from the late Murphy, then it is one social media user, Oldboga from Belgium.

And he has reacted after the Adom FM presenter proposed to a new lady based in the United States of America called Akosua Dwamena at the just ended 8th edition of 3G awards.

In an elaborate proposal ceremony surrounded by cheers from colleagues and well-wishers, the hard-hitting Adom FM presenter, Captain Smart went on his knees to propose to a lady he described as the ‘one of his heart’.

The stunned Akosua Dwamena couldn’t hide the excitement and broke into tears of joy.

However, in a reaction to this new development, some social media users who knew about his relationship with Afia Pokuaa have reacted.

Oldboga in a Facebook post shared the video of when Captain smart was proposing to the new lady and caption it;

“Congrats Mr SMART.. indeed u r SMART… U r the MAN.. I love u Mr SMART. What’s up Gent?? Hahahahahahaha

“I WILL STILL WAIT..
AFTER #CAPTAIN #SMARTs WEDDING I’M GONNA HIT HARD ON THE PASTORS AND THOSE WHO LED SISTER AFIA INTO THIS MESS
THERE WILL BE WAR AFTER MY VIDEO..”

He followed it up with a video which he stated that some elders in Gent in Belgium should be ashamed of themselves for pushing Afia Pokuaa to marry Captain Smart.

He continued to say that, he is waiting for Captain Smart’s wedding to be over and after that, he will reveal a lot and bashed all those who led Afia Pokuaa on.

And here are some more social media reactions;

MrsHarriet Acheampong added “Captain smart you are a home breaker and a womanizer …after taking someone’s wife you divorced her for another woman. .am still waiting for karma to deal with u”

Lydia Nana Ama said “Someone lost the wife coz of u now you have damp the lady to marry again. Aaaaaah captain u didn’t try at alll”

MrsHarriet Acheampong said again; “Give Captain smart the womanizer of the year award for me he deserves it,??”

The issue of Captain Smart and now his estranged wife, Afia Pokuaa, GHPAGE.com reported— a year ago in a series of publications — which revealed that the Adom FM ‘hard-hitting’ presenter snatched her from a Belgium based Ghanaian man, who is now the late Murphy.

Murphy eventually died out of a broken heart after Afia Pokuaa left him for Captain Smart.

Fast forward today—almost a year later—Captain Smart has left Afia Pokuaa to propose to yet another lady based in the USA.

Not forgetting the fact that, Captain had a first wife before Afia Pokuaa—so this will make it his third marriage if they take it a step further to the altar.