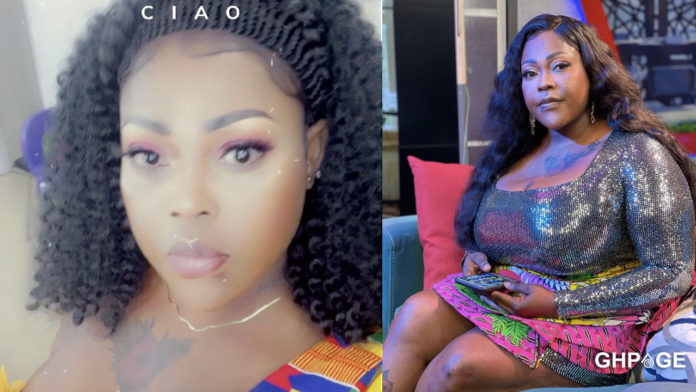 Mona Gucci’s clash with Nana Agradaa has done her more harm than good because she assumed playing the sympathy card would have saved her from the claws of her enemies and critics.

After Nana Agradaa dropped an audio of Mona Gucci begging her for 18,000 cedis to pay her rent, she crucially refuted such claims and additionally accused the former fetish priestess of pelting lies against her.

In a lengthy post on social media, Mona Gucci denied Nana Agradaa’s claims and explained that the audio was planned to help promote Agradaa’s church.

The media personality also revealed Nana Agradaa only gifted her 1,500 cedis for fuel as a sign of appreciation.

However, Mona Gucci has given the former fetish priestess a 48-hour ultimatum to provide evidence which shows that she truly paid her rent.

According to Mona Gucci, she is tired of Agradaa spewing lies against her to tarnish her image and has given her 48 hours to provide her evidence.

Mona wrote on Instagram; “PATRICIA…I didn’t wona mind u..cuz of the age difference—but looks like u r fooling too much…Who should apologize—to who? My name is Mona Gucci n I say no one will apologize to u..!! Enough of ur foolishness in this country—Agraada I am giving u 48hrs if u don’t provide evidence of ur claims…u will call ur “Agraada gods..” and I will call mine…u like tarnishing people’s image—with lies..it will end with me… 48hrs bring ur evidence of u paying my rent u will know that the “DEVIL IS BEAUTIFUL”…utter nonsense!!! KARMA isn’t done with u yet— don’t come n use ur broken heart to spew Nonsense…u r not the only mad person in the country…the maddest people are well dressed n speak good English—nonsense again…you r fooling too much— 48hrs ur time is ticking!!! Mtchewwww ??”.

Amidst the brouhaha, popular IG blogger, Tutugyagu online has released an exclusive list of all the socialites Mona Gucci allegedly went to beg for money for her rent.

According to Tutugyaguy online, apart from Nana Agradaa, Mona Gucci also went to Ayisha Modi, Obaa Yaa Black, Gh Mouthpiece and a host of others.

Take a look at the screenshot below to know more…

Mona Gucci is yet to respond to this new expose on her – As usual, she’ll come and deny but it appears she’s the one telling the lies in this story.