The family of Milton Whamper releases her funeral poster 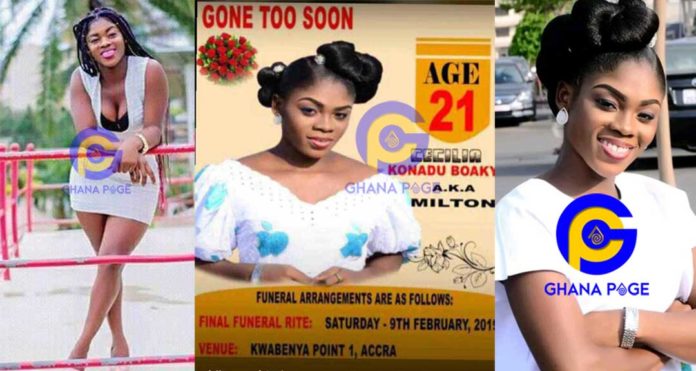 The funeral poster of Cecilia Konadu Boakye aka Milton Whamper, the young lady who committed suicide after her Sakawa boyfriend leaked her naked videos and photos has popped up online drawing tears from her loved ones.

According to the family of Milton, she will be buried on the 9th February 2019 at Kwabenya Point 1, Accra. From the poster, Cecilia Konadu Boakye aka Milton Whamper died at the age of 21.

According to the reports, the young lady who hails from Kumasi Kofrom committed suicide after her boyfriend leaked her sex video and naked photos after she dumped him.

Her friends on social media explain that Milton is a calm and beautiful lady who realized she couldn’t put up with the wayward live of the Sakawa guy and left him.

SEE ALSO: Tragic: More photos of Milton Whamper, the lady who committed suicide after her sex video got leaked by Sakawa boyfriend [SEE]

All attempt by the guy to get Milton back failed and he began blackmailing her with her naked videos and photos.

Having her login password, this guy started sharing her naked video and photos to Milton’s own Facebook friends. All attempt to defend herself fail.

A few weeks after that, Milton committed suicide on Monday dawn, 28th January 2019. Social media users have already started mourning her death. May her soul rest in perfect peace.