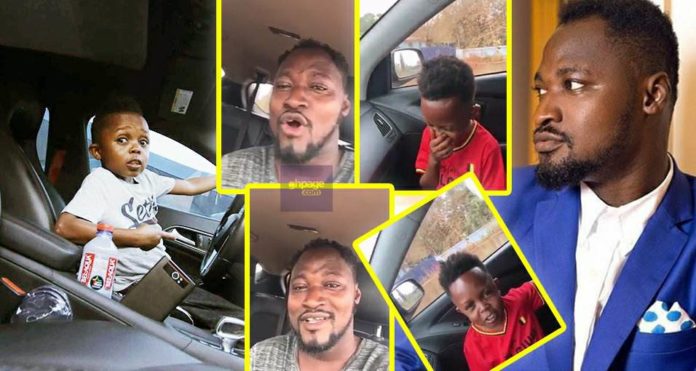 Funny Face and Don Little has finally smoked the peace pipe as they have reunited after they went their separate ways for reasons best known to them.

A few weeks ago, diminutive actor, Don Little asked the public to help him beg his godfather Funny Face since he has offended him.

According to the Don Little, he had issues with Funny Face and as such begged big people in the society who are friends with him(Funny Face) to try and talk to him so he can forget about everything that is happening between them.

Don Little who failed to explain the exact thing that made them have issues, only stated that Funny Face helped him get to where he is now and he doesn’t feel well not being in good terms with someone that brought him to the limelight.

Well, Funny Face reacted to the apology from his one-time friend Don little. In a post shared via his official Twitter page, Funny face disclosed that he had already forgiven Don Little long time and went on to reveal that he even tried getting people to try to talk to Don Little but all proved futile.

“I have forgiving bro ( Don little ) .. Keep shinning and never give up .. God gotch you”

read also: Check out all the dresses Becca wore at her traditional wedding

It seems all is set as the two have been sighted in a new video and their message to Ghanaians suggest that they are back together. Funny Face who made it a surprise stated in the video that “To err is human to forgive is Divine”

Don Little also thanked Ghanaians and all those who begged Funny Face on his behalf.