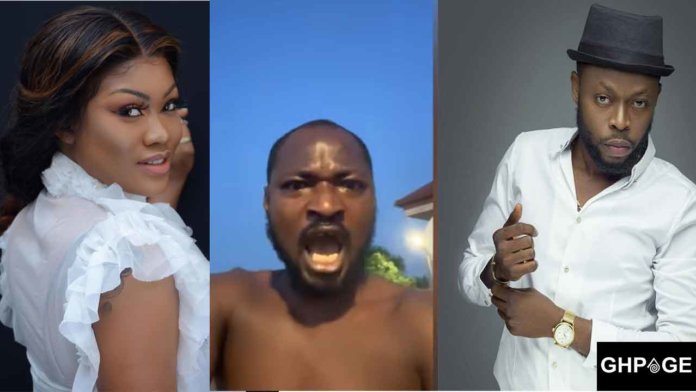 Funny Face who did not mince words, rained curses and insults at these actors for peddling lies against him and also tarnishing his image.

Amidst tears, Funny Face cursed his colleague actors and vowed to expose all their secrets if he is dared.

“I have cursed all those insulting me without knowing what I am going through. I am giving all these haters a period of seven years, they will lose whatever they desire in this life. You will all go through my pain and if Liwin, Sandra Ababio, Kalybos and Bismark The Joke dares me, I will expose their secrets”, Funny Face fired.

Funny Face also vowed to deal with anyone who wants to destroy him and will leave no stone unturned this time round.

This brawl between these comic actors started after Kwadwo Nkansah Lilwin stated in an interview that Funny Face does not deserve to be crowned Ghana’s favourite comedian.

These actors exchanged harsh words but later decided to let peace prevail but it seems the ‘beef’ has been rekindled.

This time around, Funny Face involved two of his friends in the movie industry, Kalybos and Bismark The Joke describing them as betrayers.

However, the Togolese footballer, Emmanuel Adebayor who is also a very good friend of Funny Face has pledged his support to him in his fight against these actors.