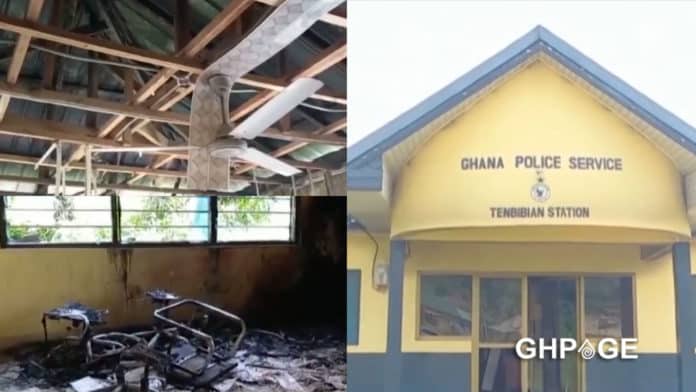 A newly constructed Police station which is scheduled for commissioning this week has been set ablaze by some suspected Land Guards at Tenbibiano near Obom in the Ga South Municipality of the Greater Accra Region.

Residents were left in state of shock after waking up to the henious crimes committed by the unknown assailants for reasons yet unknown.

The suspected land guards vandalised the glass doors before setting all furniture in the Commander’s office ablaze.

According to information gathered, Tenbibian, Obom and Ashalaja has been declared as a no go area due to Land Guard activities.

Due to this the police station was set ablaze to prevent police officers from interfering in their criminal activities.

Speaking to the media, the Assembly Member for Kweku Pamfo Electoral area, Jonas Kwabena Tenge said the people who committed the crime used petrol to set the police station ablaze.

He said the Chiefs, opinion leaders and residents in the area will have an intensive investigation in collaboration with the police in GA South to arrest those behind the crime.

No arrests have been made yet.