Vim Lady, the popular radio, and television presenter, known in real life as Afia Pokuaa has hit hard on an inquisitive fan of hers on what seemed like a disrespectful question to her. The ‘hard-hitting’ beautiful presenter made it clear she had no room for such questions.

Her fan, one Patrick Ato Bonku possibly had his worst day after making some inquiries of which to Afia Pokuaa, was supposed to be her issue of her personal life.

Afia Pokuaa who is currently on leave and enjoying good sleep at home as well as seizing the opportunity to post some ‘sexy’ pictures on social media attracted fan on asking when she is getting married.

Afia Pokuaa didn’t take it lightly at all and in return fired back at her fan having indicated;

“when you get busy enough not to waste time thinking about people’s tonga business”.

READ ALSO:Celebrities you won’t believe are gay! [Number 5 and 10 Will Shock You]

Patrick, though, indicated the response to his question was harsh and below the belt, most celebrities wouldn’t mind supporting the reply from Afia since its long overdue their private lives become their own concern and not to the public as currently is.

Check the conversation as it ensued below; 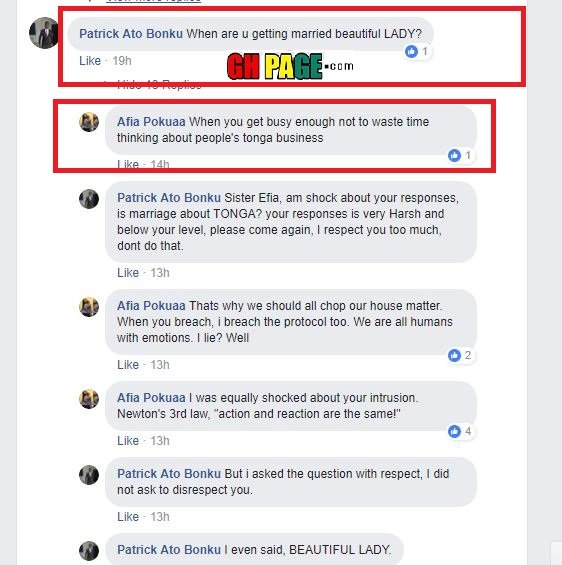 The conversation resulted in sort of a banter, and it looks like Patrick’s inquisition of when Vim lady was going to get married, is a question most Ghanaians celebrities have suffered. 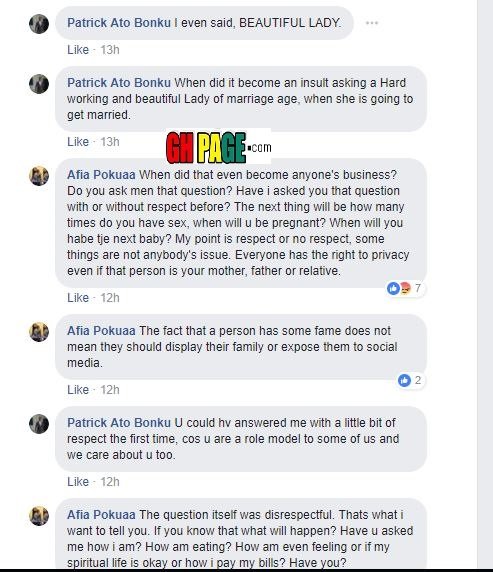 It’s as if the celebrities are been monitored as to what they should do in every step of their life. Most Ghanaian celebrities suffer this fate, a challenge to many of them since some comments from the public could be very controlling. 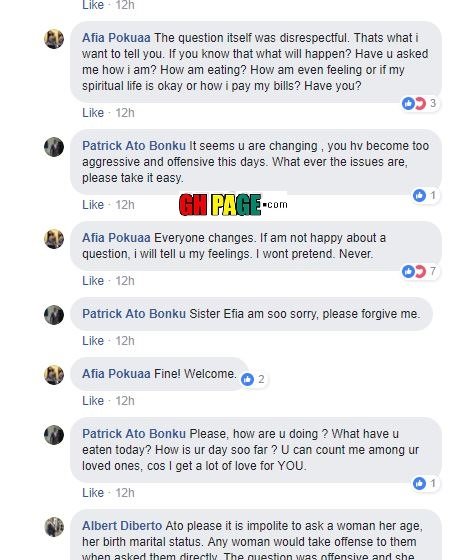 Meanwhile, earlier this week ‘Vim’ Lady as she is popularly called, took to her Facebook page to make some allegations indicating KABA’s death was not due to natural causes.

Her comments together with one from a colleague presenter, Ohemaa Woyeje attracted a public backlash —as what it was regarded as an incentive comments coming from those who should have known better.

Afia came out to react and here’s what she said about her ‘juju’ statement in relation to KABA’s death.