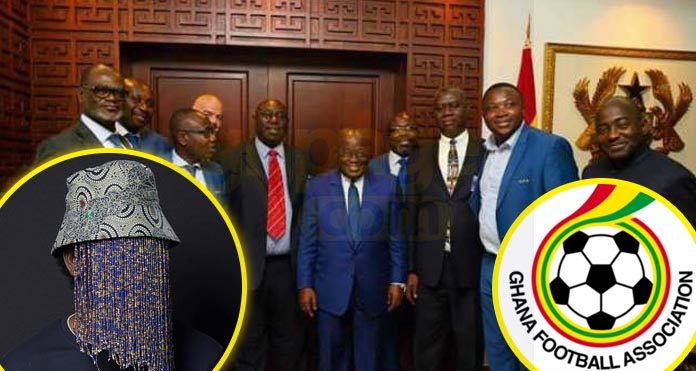 President Akufo-Addo on Tuesday, May 22, 2018, ordered the GFA boss, Kwesi Nyantakyi to be investigated by the Criminal Investigation Department (CID) for stating in the exposé by Investigative Journalist Anas Aremeyaw Anas that doing business in Ghana is easy.

He had further indicated that by giving the President an amount of $5 million and the Vice President $3 million, you are good to do business in the country as the duo are in his pocket but the Editor-In-Chief of the New Crusading Guide, Abdul Malik Kweku Baako has stated that the FA boss never made those statements attributed to him.

Meanwhile, officials of the Ghana Football Association (GFA) have issued threats to President Akufo-Addo, in the wake of the investigations against their president, Kwesi Nyantakyi.

President Nana Akufo-Addo is being threatened by some officials at the Ghana Football Association (GFA) over the investigation of fraud against FA president, Kwesi Nyantakyi.

According to a close source, the officials have threatened to spill the beans if Kwesi Nyantakyi is implicated in the ongoing probe.

There are claims that there is an attempt to hound Kwesi Nyantakyi as the FA president and government is currently using some individuals to advice Kwesi Nyantakyi to resign honourably.

According to the source, the GFA officials “have threatened to expose the ills in government. They are against the resignation of Nyantakyi and so they are willing to expose the government.”

READ MORE: You Cannot Silence Me With My Leaked Photos – Anas Fires At Kennedy Agyapong