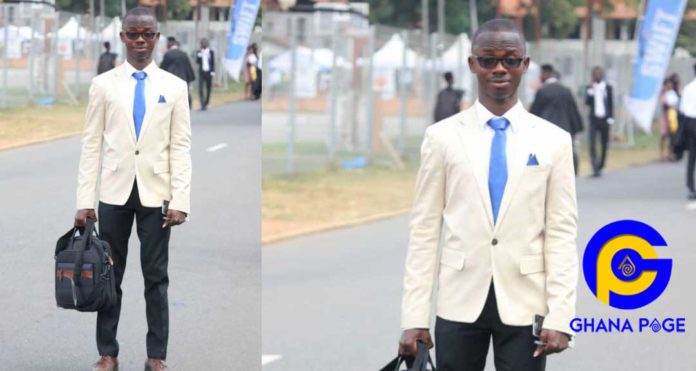 It was asked of Kwadwo what influenced his invention and he said, “I got inspired by God.”

Growing up in a Zongo community in the Ejura-Sekyedumase Municipality, he has always focused on his books. However, he realized that there was no available way to exhibit his knowledge and wisdom to residents of his community. He voiced out that he had always wanted to share his wisdom of how the community he lived in could be improved. Because of the difficulties and challenges faced in each community he lived in, including East Legon, he saw the need to create a solution that will bring community residents together on a single platform and develop a new category of online communication called “Community Media” where residents living in one community will share ideas on how the challenges in their communities could be solved.

When asked to explain how the name Comcent came about, Kwadwo Dwomo II said he was inspired by the word “Community Center.” And shortened it to Comcent.

Asked how exactly Comcent intends to solve the communication challenges in our communities, Kwadwo Dwomo II explained that what Comcent does at the moment is, it connects the leaders in the communities to their members. He terms it a division of roles. The members of the communities are supposed to publish their concerns (or collective needs), suggestions and issues they have to their leaders.

Both members and leaders of a community can also decide to publish and inspire each other while dreaming big and bringing the change that the world and our communities urgently desire.

Asked what inspired his thinking to let members begin their publication with either “We” or “Our”, he confessed that it was God. It was as if God wanted his creations to start to think like they are one body. He said it was difficult resolving that restriction in his mind, but later on, after several tries himself, he saw he was getting more creative when he began to frame his sentences, to begin with, “We” and “Our” and it was changing his way of thinking and it was fun as well.

However, he is of the opinion that since this is a discontinuous innovation, it is going to take a while before the people get used to it and after that, he believes, this invention is going to completely change the world. Also, members who publish resourceful information on Comcent, after they have been recommended by their leaders will be promoted to a leadership position on Comcent and that comes with a great benefit. He hopes more and more members aspire to become leaders on Comcent.

According to him, Comcent in the next 10 years will disrupt the social media category and replace it with the community media category that he and his team are pioneering. He and his team are of the view that social media, even though was created to solve communication problems among friends and families, was not designed with enough foresight by Mark Zuckerberg and his team, and as a result, was causing narcissism among the youth and even among the elderly. He believes social media is destroying our social fabric. A recent example is of how social media was allegedly used by Russians to cause a change in the outcome of the American election.

Several high-profile individuals, including founders of the social media company Facebook, have come out to publicly condemn their creation and the effect it has had on the mind of its users. Studies by European scientists also show it causes depression, especially among the youth. He believes if humans were to put at least half of the energy and time they spent on social media on the new category called Community Media, awareness could rise on the challenges we face in our communities and might start to hold our Community leaders and ourselves responsible.

With a community media, it is about people you’re living in the same geographical community with and he and his team are taking meaningful communication in those communities online. Kwadwo Dwomo II also gave his vision for Comcent whereby Comcent would become a public utility tool for our communities in the world and a lot of infrastructures will be built on it.

During registration, you choose the community you live in and start to publish your thoughts so the people living in the same community as you can see how brilliant and intelligent you’re. You see information coming from your community and nowhere else. Currently, he and his team are opening Comcent to only tertiary students starting from the next academic year.

Asked if he will open it to other people besides these group of people, he said, the team are still working on how the transition is going to be, but his users should be rest assured that they wouldn’t do anything to compromise on quality information and news. He believes the target users for Comcent now is the matured person who has evolved from the use of social media because now he/she want something that satisfies his/her maturity in life. It is like Comcent becomes the next evolution of human beings after they have been less concerned about themselves and become more concerned about what goes on in their community.

We spoke to the leader of the University of Ghana, His Excellency Sylvester Owusu Amoako, and he expressed delight at the invention. His Excellency Sylvester Owusu Amoako believes that this invention will go a long way to deepen the democracy within the community. He said, before, they were using social media to communicate to the students which were ineffective because social media as a communication tool is for friends and family. He is hopeful that Comcent will make them productive in their daily activities by helping them get direct feedback from their constituent members and they can also share the things that they are doing for the community so everyone on Comcent can know what they are using the dues they pay for.

Asked who is funding this project, he confessed he is been funded by private wealthy individuals who believe in the mission and vision of Comcent and the new category they represent – Community Media – but now his investors want to remain anonymous.

SEE ALSO: I wanted to study Psychology at the University-Kwesi Arthur

When he was asked how he intends to win the battle against social media, he said, he sees the victory ahead already. Perhaps he is an ardent reader of Sun Tzu and as Sun Tzu always say, winners win before they go to war and losers go to war and find a way to win.

Kwadwo Dwomo II and his team and their creation – community media (Comcent)
– inspires us to believe that what the Caucasians and Asians can do, Africans can do as well, maybe differently. The African may have been deprived of some opportunities that are available in America, Asia, or Europe, but Kwadwo Dwomo II and his team never see that as an excuse. With their passion and determination, we believe the sky is the limit for them.

At age 25, he is already a paper millionaire. He admitted that he has been receiving acquisition offers from other companies and high net worth individuals across the world. He started preparations on Comcent in late 2015 and took him three years to prepare a plan that can succeed in the global marketplace.

In conclusion, he hopes that the community media category that they are pioneering have a positive impact on the UN SDG 11 (Sustainable Cities and Communities).

We will keep you updated