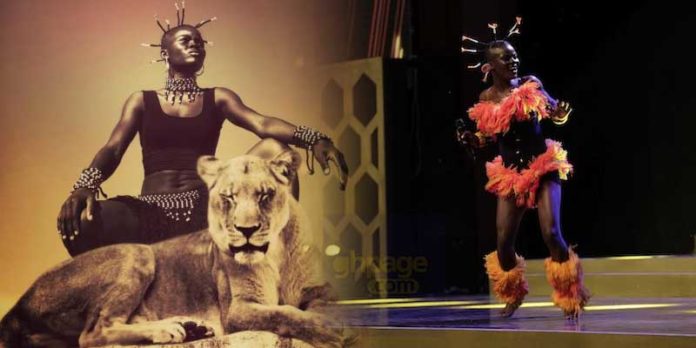 Known for songs like So Rock My Body, Make Me Dance, Sun and Moon, Go Go Black Stars…Goal!, Angel, You Got the Power and Bunsun, Wiyaala who is less appreciated in Ghana has stated that she’s currently the most sought-after musician in Ghana.

In an interview with Graphic Showbiz, she revealed that she’s the busiest artist in Ghana currently just that she doesn’t play most of her shows in the country.

“I am one of the busiest artists in Ghana at the moment. I am mostly in different countries killing it there” she said.

Read also: My P£nis has refused to Erect since I was assaulted-Osofo Appiah

Veteran musician, Kojo Antwi aka “Mr Music Man” once posited that Wiyaala is underrated as far as the music industry is concerned in Ghana.

According to the “Adiepena” hitmaker, the young lady is doing more than being recognized, which he somewhat attributed to the language and taste of consumers not excluding the media.

Kojo Antwi said more light should be thrown on Wiyaala since other countries celebrate the Ghana music award winner even more than her own country.

Most pundits and most real colleague musicians, as well as bloggers, have once posited that Wiyaala is damn talented but it’s unfortunate how the very people she represents – Ghanaians don’t value her craft as expected. Not too long ago, musician Kojo Antwi made a similar statement.

In the interview, she went on to say that flopping on stage is not part of her dictionary because of constant rehearsals. Besides, her utmost desire is to give her fans the very best of energetic performance so she can’t just perform abysmally.

“I don’t know what will make me flop on stage when I know what my audience wants. In fact, I have never flopped on any stage since I hit the limelight about five years ago.”

“I also leave my audience or fans screaming for more and that is what I want every musician to do. The fans pay to watch you so you need to entertain them and make them enjoy your act” she revealed.

Read this: Kumi Guitar recounts his first encounter with Stonebwoy after dissing him