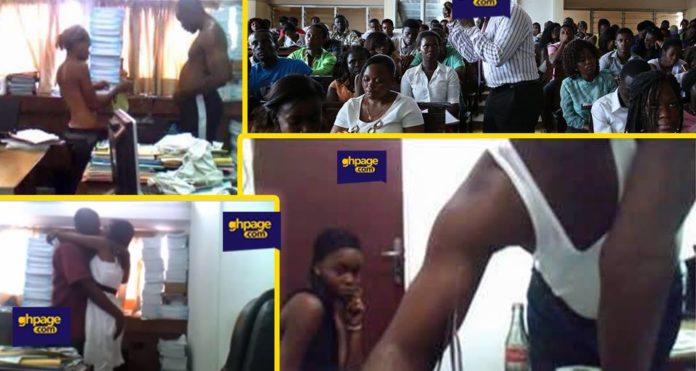 According to reports cited on MyNewsGh.com, an investigation undertaken has captured several top and highly respected lecturers in the universities of Ghana in “s*x for grade” scandal.

According to the report by MyNewsGH.com, the names of some of the lecturers who have been captured in the s*x for grade scandal are ” extremely shocking, mind-blowing”

The evidence against these lecturers in the top 5 main public universities comes in the form of Audio recordings, pictures, texts, and videos. These have sent shocks down the spine of some lecturers who are afraid they may be captured in the yet to be released exposé.

The investigations which took 3 months together all the evidence centered on female students who have been victimized in the s*x for grade rumors that have existed for years in Ghanaian universities.

Some of the students recounted to the investigators how they were intentionally failed just because they refused to give in to the s*xual pressure from their lecturers.

“… That day he told me to come back at 11:30 am or he will come and pick me up to a hotel. And I told him I have lectures and he told me not to go. You can look at our chats that day, he even sent me nude pictures only that his face is not showing, but that’s him.” one student narrated, with ‘hardcore’ evidence.

SEE ALSO: Meet the young girl SHS leaver who scored ‘A1’ in 7 of her WASSCE subjects

“A course that many people had A, he gave me an F. I just decided to let sleeping dogs lie and concentrate on my studies. It started with an IA, after checking the IA and everything which was bad, I took it for remarking, and he told me at a point that the IA looked good, but he wasn’t going to do anything about it unless I ‘opened’ up”, Another student also narrated her ordeal.

Ghpage.com is following the report and will update you when the full report with its evidence is finally put out into the public domain.

STAY WITH GHPAGE.COM FOR MORE

SEE ALSO: Church elder found dead in a guest house after intercourse with a church member