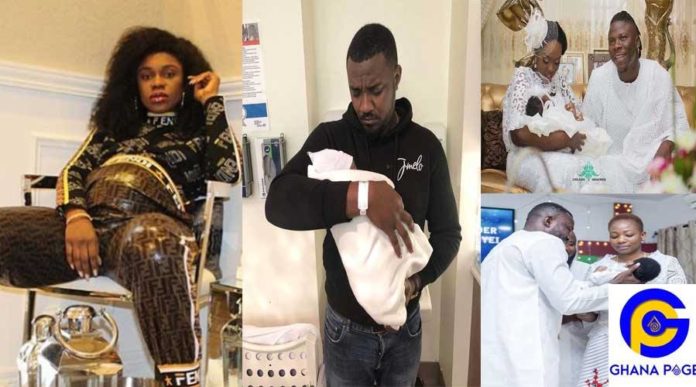 Having babies is a gift from the Almighty God and it’s very couple’s wish to have children after getting married.

Pregnancies are expected to last for nine months and in African society, every married couple is expected to have children immediately after marriage.

But it seems some couple have special blessings from God that make them get pregnant and give birth in less than nine months.

Ghanaian musician Becca has been in the news lately for having a baby girl just six months into her marriage.

This is a list of some Ghanaian celebrities that received such blessings from God and had children less than nine months after getting married;

Ghanaian actor John Dumelo got married to Gifty Mawunya Nkornu in a traditional ceremony on 12th May 2018.

Dumelo’s wife gave birth after five months of marriage and the actor explained that he practised the ‘double-track’ system which made his wife give birth in less than nine months.

ALSO READ: 10 things to consider when choosing a life partner

The musician got married to a Nigerian banker and music executive, Daniel Tobi Sanni on 18th August 2018.

Recently, pictures circulating shows that Becca has given birth to a baby girl which shows that she was pregnant before the wedding.

The award-winning musician got married to Dr Louisa Ansong in June 2017 and the couple welcomed their first baby girl six months after their wedding.

The versatile musician got married in March 2017 and welcomed his first child in November 2017.

The rapper got married to his long-term sweetheart, Doris Kyei Baffour in April 2016. The couple had their first child six months after the wedding, in October 2016.