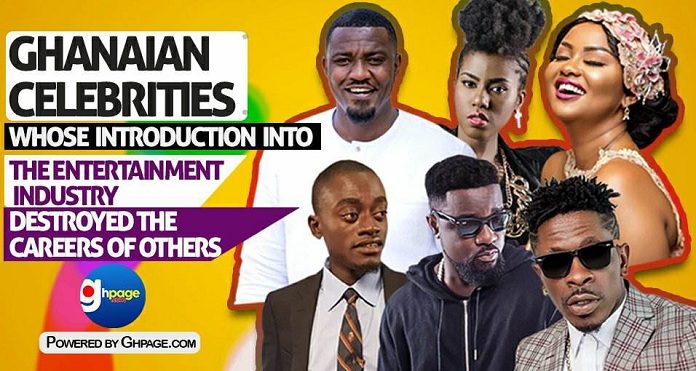 John Dumelo is one of the most popular Ghanaian actors in Africa. He was nominated for Most Promising Actor and Best Actor in a Supporting Role at the 6th and 7th Africa Movie Academy Awards respectively.

The gentle NDC staunch supporter was the first choice for most movies not long until another actor who is equally talented and fits John’s role popped up in the movies scene. He is James Gardiner.

SEE ALSO: 7 Ghanaian Celebrity Kids Who Are Not Yet 20yrs Old But Are Already making Ghana proud

Since then, Obrafuor has been the most respected and highly valued hiplife artist in Ghana until Sarkodie was unveiled by Hammer, the same music producer who unveiled Obrafuor.

There seems to be a special body of respect between Obrafuor and Sarkodie. Although Sarkodie took over from Obrafuor, Obrafuor willingly gave the crown to Sarkodie and he has performed wonders since he took over.

Sarkodie in the history of Ghana is the artist that has championed Ghanaian music all over the world. The BET award winner is counted among the top 3 best rappers in Africa. Born, Micheal Owusu Addo, Sarkodie, the CEO of Sarkcess Music is currently the most highly rated musician in Ghana.