Ghanaian celebrities reacts to Kwaw Kese’s curse on the country 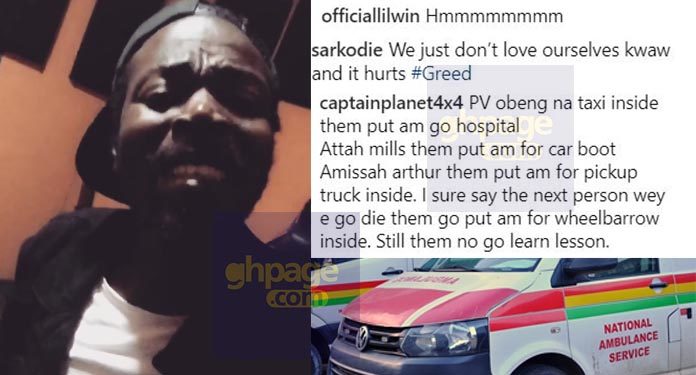 Popular Hiplife artiste Kwaw Kese aka Abodam yesterday called on God to continue punishing Ghana. He also prayed to God to kill Ghana Leaders one after the other for their neglect of the Ghana health service.

For weeks now, one of the main discussions in Ghana is about the fact that Ghana, a population of close to 30 million people has only 54 ambulances. Meanwhile, there are close to 1000 V8 vehicles owned by politicians.

According to the rapper, the big hospitals in the country such as Korle Bu Teaching Hospital in Accra and the Komfo Anokye Teaching Hospital in Kumasi can be compared to the deplorable prisons in Ghana such as the Nsawam Prison because people sleep on the floor when they are admitted to such hospitals.

In a short video posted on Kwaw Kese’s Facebook page, he called on God to continue punishing Ghana and also prayed to God to start killing Ghanaian leaders one after the other until the lesson the spirit of patriotism.

read more: Man loses leg in an attempt to bribe a policeman

Meanwhile, other celebrities have reacted to his post which is now the hotly discussed topic in Ghana now. It is no wonder as all of them were in support of their fellow.

Yvonne Nelson who has been a crusader for good governance couldn’t help but repeat her comment to show how furious she is.

read this: I lied about actor Waakye sleeping with me – Rosemond Brown

Stonebwoy also urged him on to bring more of such topics.

According to Sarkodie, the love for ourselves in this country is way beyond imagination.

Liwin was just short of words to describe his frustrations.

read also: How to make money online as a student in Ghana

Captain Planet of 4×4 recounted how lack of Ambulances have seen prominent people who have passed away carried in taxis and boots of cars.

read this too: An Audio of fan playing pranks on Patapaa goes viral