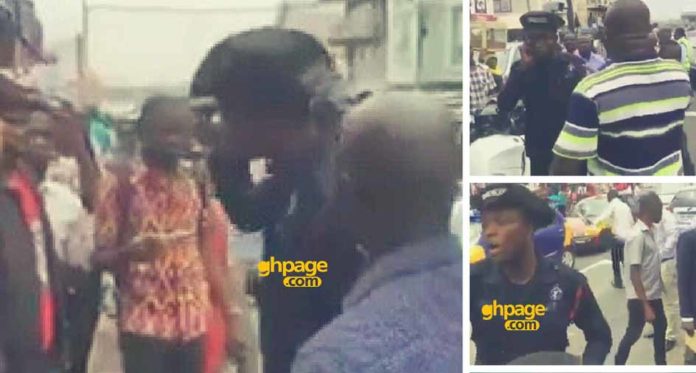 Some Ghanaian citizens in Accra in a video GHPAGE.com has sighted attempted to arrest a policeman who slapped a public transport driver for flouting a rule.

According to reports, the police officer slapped the driver during a misunderstanding at Kokomlemle in Accra today, Friday, August 3, 2018. 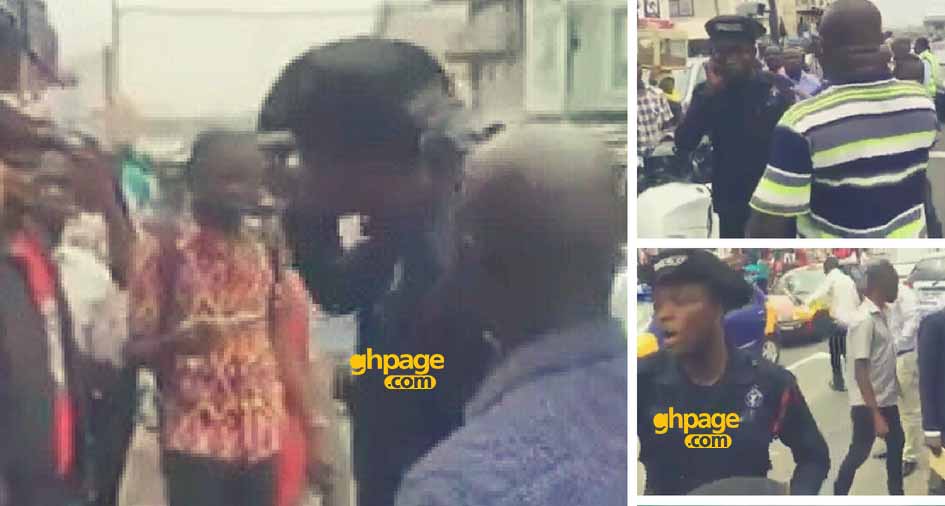 The policeman whose name and station is yet to be identified was seen scuffling with some of the people around.

Those surrounded doing what is described as the citizens’ arrest could clearly be seen blocking the officer who was trying to escape from the ensuing chaos scene.

From the video, the policeman was only holding a baton and alone on duty was seen explaining his actions to some section of the people surrounded.

READ ALSO: I’m happy I looked s*xy in the leaked video – Aisha to those sympathizing with her

Others were pointing their fingers at him—seemingly blaming him for his actions and some section were only recording what was happening and shouting “you will come on Facebook, you always arrest people, today we are arresting you”.

On the other hand, the police officer was able to place a call to someone and was heard saying ” …They are not allowing me, there are some groups who have said they have arrested me”.

In an event which caused a massive traffic around the premises of multimedia later saw some of the people ushering the police officer into Joy FM’s building.

The citizens’ rage comes after one undisciplined police officer Frederick Amanor aka Skalla a week ago assaulted a woman, Patience after she had come to redraw her 270 cedis from Savings and loans bank, Midlands.

Share
Facebook
Twitter
WhatsApp
Previous articleI’m happy I looked sexy in the leaked video – Aisha to those sympathizing with her
Next articleTracy Sarkcess flaunts her $50,000 diamond ring in latest photo