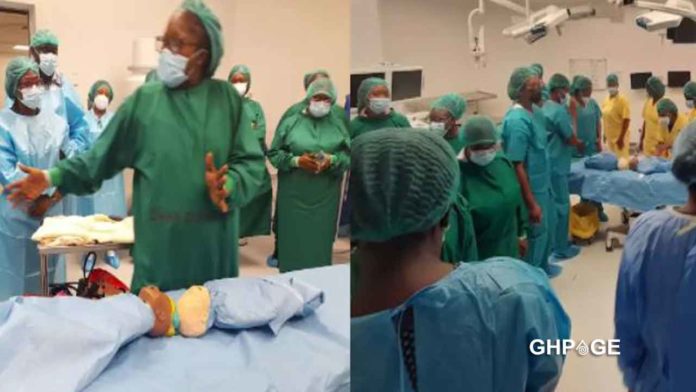 A group of health experts from the biggest hospitals in Ghana have started rehearsing with toys ahead of the surgery to separate a set of twins conjoined at the head at Ridge.

Since it is the first time the procedure is being carried out in Ghana, intentive rehearsal has begun for the separation of a set of Ghanaian twins.

It has been indicated that 135 doctors will be involved in this exercise.

The medical exercise officially termed as ‘simulation’ is being undertaken as a necessary step ahead of the all-important surgery.

Meanwhile, President Nana Addo Dankwa Akufo-Addo has fulfilled his promise to pay GHc3 million, which is the cost of surgery for the conjoined twins who went viral on social media.

In other news, Ghanaian Real Estate mogul Nana Kwame Bediako has donated a huge sum of money (GHS600,000 )towards a surgical procedure to separate conjoined twins at the Greater Accra Regional Hospital.

This news was disclosed by the acting general manager of GHOne TV, Nana Aba Anamoah, who has led a campaign to solicit funds to cover the total cost of surgery.