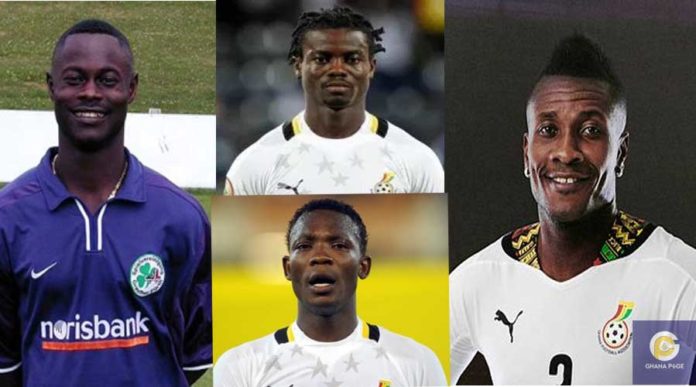 Over the past few years, some top Ghanaian footballers have gone through serious marital scandals that ended their marriage.

Some of these marriages ended on grounds of infidelity, deceit and abuse and the only solution to the problem was divorce.

ALSO READ: Top 10 Ghanaian Celebrity baby bumps that will give you baby goals

Ghanapage.com brings you a list of some Ghanaian footballers whose marriages have broken down and separated from their long-term spouses.

The captain of the Ghanaian national team is currently seeking a divorce from his wife with whom he has been together with for 15 years, with three children on grounds of infidelity.

Asamoah Gyan requested a DNA test to be conducted on his children to determine the paternity.

However, the results revealed that indeed Asamoah Gyan is the father of his three children. The annulment case is still in court currently.

The Ghanaian International footballer who most recently played for Beitar Jerusalem has been accused by his wife Mrs Gifty Annan for refusing to perform his marital duties.

According to his wife, the last time she set eyes on her husband was 2 years ago when he came to perform the naming ceremony of their last child. She stated that Anthony accused her of infidelity and asked her for a divorce.

The couple has four kids together.

The former Ghanaian footballer left his marriage of 21 years after a DNA test proved that he was not the biological father of his three children.

According to the footballer, he was informed by some close friends of his wife’s infidelity and decided to investigate. He also received some recordings of his wife cheating and decided to conduct a DNA test and also sought a divorce.

During the court proceedings, his ex-wife demanded 50% of all his assets but an Accra Court denied her.

Currently, Nii Odartey Lamptey is a proud father of two beautiful girls with his new wife Ruweida Yakubu who is an actress and former Ghana’s most beautiful finalist.

The retired Ghanaian professional footballer was arrested in 2013 after his then-wife, Richlove accused him of assaulting her.

The arrest led to their divorce a few years later. The couple has three children together.

The wife of former Ghana defender who played for AFC United in the Swedish second-tier league, Henrietta filed for divorce in 2013.

John Mensah was accused of infidelity and after a lengthy legal battle, the court granted the divorce with a lot of benefits to his ex-wife.

Speaking on the divorce, John Mensah stated that his divorce made him stronger.

ALSO READ: You are the loudest but poorest in the industry -Kwaw Kese to Shatta Wale