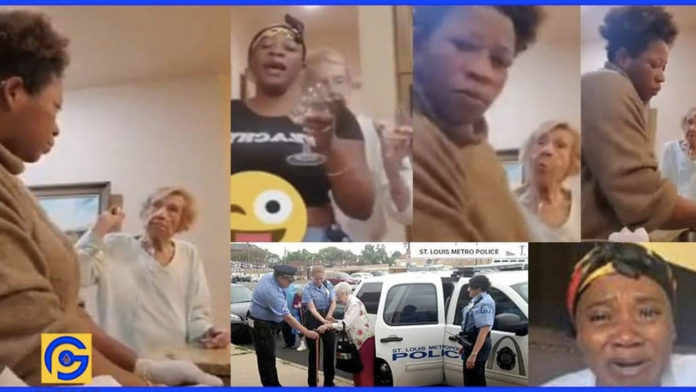 The black caregiver who was spat on by an aged white woman she cares for in a viral video has finally opened up in a recent interview.

The young lady who happens to be a Ghanaian explained that she has been taking care of the old woman for 5 years and that she has not always treated her badly.

According to the lady, the old woman was diagnosed with dementia in 2020 which got serious during the pandemic.

She revealed that the old woman usually calls the police to accuse her (caregiver) of assaulting her which is not true.

The Ghanaian lady explained that she recorded the videos as evidence to prove her innocence but not for public empathy.

She further stated that she recently lost her phone when she attended a programme and that the videos including her nude pictures are being leaked by those who stole the phone.

“I didn’t record this video to gain empathy from anyone, I did it for my own evidence and record. I have worked with this old woman for 5 years, she was recently diagnosed with dementia.

I only recorded the videos to prove my innocence as she mostly calls the police to accuse me of assaulting her. I recently lost my phone and I am sure the videos are being released by the one who stole it.

She has not always been like this, it is as a result of her current condition. My kids and family are traumatized by this issue”, she explained.

It can be recalled that an old white woman was seen spitting on her black caregiver several times while she was cleaning the dishes.

This video sparked an outrage on social media, where people described the act as racist and heartless.