This Is What Happened When A Ghanaian Nurse’s Dad Asked For 48 Inch TV, A Plot Of Land & A Taxi As Bride Price Or He Won’t Approve The Marriage 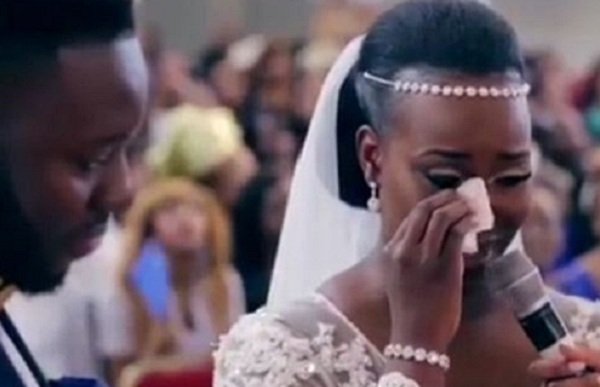 One famous portion of marriage is the part which a bride’s family gives to the groom’s family to procure before the engagement and wedding can go forward.

This story of a nurse’s dad seems to be different altogether by accumulating such huge items for the groom and his family to provide.

This is what the father presented to the groom’s family to buy, 48-inch flatscreen tv, a taxi, a plot of land and 15 pieces of kente cloth.

READ ALSO: Shatta Wale explains how his affair with Michy started and why they are still not married

Upon all these, the groom got annoyed, but the father refused to redraw it back so in the end, the two had to break up because of the man’s stubbornness.

The brides’ father found another man willing to marry her and her father came up with the same huge list After four years of no guy coming near her daughter.

This is what happened… the bride wrote…

I was twenty-four years when Charles and his family came home to see my parent and asked for my hand in marriage. I’d dated Charles for over two years and throughout the years that we were together my parents were aware and his parents knew me very well. It was a fun and happy day when both families met to discuss the arrangements for the marriage and also to get the marriage list. My dad presented the marriage list in a sealed envelope to Charles and the family and later dispersed. Honestly, I didn’t know what was on the list. My parent didn’t discuss it with me and I didn’t bother a lot about it because I knew Charles would let me know what it entailed.

The night after the visit, Charles called me and I could sense the anger in his voice. His anger was about the items on the list. I rushed to see him that night and I was awed. I was actually sad to see the things my parent have listed as the bride price. Among other things, they wanted a brand new taxi, a 48-inch flat screen TV, 15 pieces of Kente cloth and a plot of land somewhere in Kumasi. Charles was so angry that he was visibly shaking. I tried calming him down and asked him to leave everything for me to handle.

I rushed home and called my parent for a discussion. Dad got angry when I broached the topic; “Who are you to ask us to reduce what we’ve carefully selected as your bride price? If you want your husband to respect and treasure you in the marriage, then keep quiet and allow him to get those things for us.” He walked over me and entered his room and his wife also followed. I was devastated and started crying. The next day, I called our pastor in to intervene. That didn’t work. My dad got angrier and accused me of taking family issues outside. I became frustrated as the days went by without getting my parent to change their mind. Charles was determined to wait for me as I tried working things out. My parent refused to shift grounds.

Four months later, Charles had to leave me. He told me; “Tricia, it doesn’t make sense. Even if I could afford to get those things on the list, it still doesn’t make any sense for your parent to request things of such nature. Are they trying to sell you to me?” I asked for more time from Charles. I pleaded with him to give me more time to make things right but he thought he had been patient enough. He was right. He had been patient but all I was wishing for was more time. I didn’t even know what I was going to do next to get them to change their mind about the list but somewhere I hoped more time would help to sway their mind. It didn’t work. Charles left me.

The story of my marriage list spread in the church like a wildfire. It became the gossips’ topic. Men avoided me as if I was some plague waiting to infest them. For four years I never had a boyfriend. Within those four years, my three close friends got married and one even had a child. I became very miserable and got scared anytime I thought of my future. I was growing. What if I hit the dreaded thirty without even a boyfriend?

At 29, Randy came along. Randy was swift, clever and knew what he wanted right from the start. He didn’t come with the intention to marry me. When I asked him what he needed from the relationship he said; “ I’m not looking for anything extraordinary. Just a friend I could call a girlfriend.” Honestly, I didn’t understand what he meant but there was something I liked about him. He was defiant and had an anger for things that don’t make sense. I called that a “serene anger.” He doesn’t fight or throws tantrums when he was angry. He’ll just move on and do what makes him happy. His sense of humor is unmatched. When I told him about the marriage list and why Charles didn’t marry me, he said; “Your dad is clever. If he demanded anything less, I wouldn’t have met you.” Crazy head Randy.

A year into our relationship, that was September 2013, Randy suggested we got married in the next coming year. I should have been happier but I was scared. The story of Charles and me started playing out all over again. I went home, told my parent what Randy had told me and asked them to prepare the marriage list for me to vet before Randy comes to see them. My dad again flared up; “You think you are sensible than both of us? We are trying to get the best for you and you are here talking about vetting? How are you sure he could take care of you if he couldn’t afford what is on the list?”

He didn’t show me the list. As the day approached for Randy and the family to come over, I got scared and agitated. “What if this man does what he did the last time?” “What if Randy leaves me too?” “What if….” The day finally arrived. Randy came with his mum and his uncle. After everything was said and done, my dad gave them the list in a sealed envelope and he said; “I hope you don’t get discouraged. My daughter is a good girl. I raised her very well and she deserves all the honor you could afford through fulfilling what’s on the list given you.”

I left with Randy and the family. I couldn’t wait to see what was on the list. He flipped the envelope open in the car as we were going home and guess what, everything was just as the one he gave to Charles except this time it’s 20 kente cloth instead of 15. Randy laughed and said; “Obviously your dad doesn’t want you to marry but let’s surprise him.”

Randy gave my dad a call the next morning trying to negotiate the list. My dad insisted he couldn’t do anything about it. That was the last time Randy spoke to my dad. I spoke to my mum’s siblings and some siblings of my dad who had opposed my dad’s standpoint all along and they accepted to stand in for me as my parent. I didn’t care again. I didn’t say anything again to my parent. I left the house and stayed with a friend.

On May 3rd, 2014, we got married. On May 5th, 2014, we went to the Metropolitan Assembly, signed the legal documents and became legally married under the ordinance. The next day, I called my dad to tell him I was married. He didn’t pick my calls. I called my mum who picked. She couldn’t say a word but cried throughout the conversation. My dad told some family members that I’ve dishonored him and as such, he had disowned me. He told them I shouldn’t attend his funeral when he dies.

I’ve tried several times to reach out to him through different means and through different people but he wouldn’t see me. Mom occasionally talked to me and told me how my dad was faring. Seven months into our marriage, I and my husband left Ghana to settle in Canada and we’ve been here since. Dad doesn’t talk to me still. Mom talks to me but she wouldn’t accept anything from me. She doesn’t want to disrespect his husband, which I understand. I’ve been happily married and I’m glad anytime I get to know my parents are in good health. I only hope someday Dad would understand and forgive me.

YOU MIGHT READ ALSO: Ghanaian Female Gospel Musicians Who Have Been Hit By Divorce