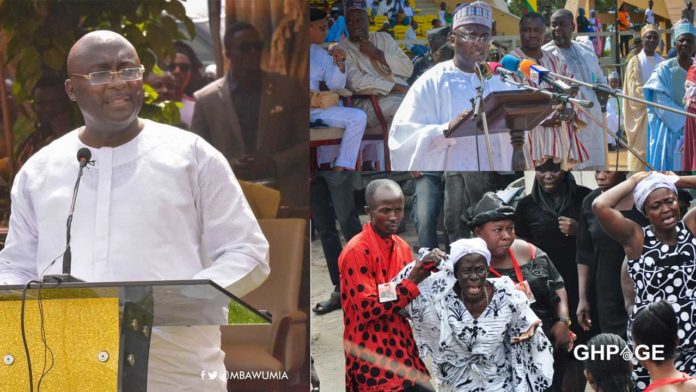 Seems we were making a big mistake when we thought that all prophecies for the year 2020 all came on 31st December Night as another prophet has come out to ask Ghanaians to start praying for the Vice-President Dr. Bawumia.

According to a Kumasi based Pastor identified as Prophet Samuel Owusu of Wisdom Worship Centre, God has revealed to him through a revelation that Alhaji Dr. Mahamudu Bawumia could lose his life through a motor accident this year.

He added that some people whom he described as evil are trying very hard to make the vice-president lose his life through an accident.

Also Read: I’m not scared to die or be killed – Prophet Nigel Gaisie

Prophet Samuel Owusu explained that these evil people planned to carry out the act last year but they failed and therefore they are bent to carry out their attack this year.

“The nation must rise up and pray for our Vice President, Dr Mahamudu Bawumia; the evil one is bent on making the God-given purpose of the man go to naught; some people have plotted against the man, the Vice President, that he should be involved in a car accident”, he said in an interview on Kumasi-based Angel FM.

The prophet who claims God revealed all these to him through a vision said further that, “in a vision, I saw a multitude clad in funeral apparel at the Independence Square and it looked like the funeral rites of a great person and a lot of people were wearing black dresses; that is the way the Lord revealed the plot against the Vice President to me”.

Listen to him below: