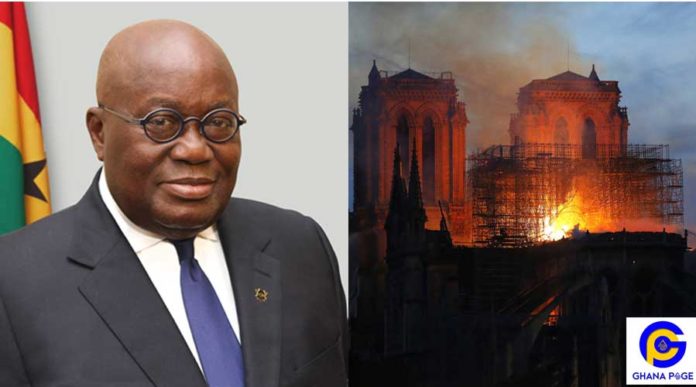 The President of the Republic of Ghana has been criticized heavily over his tweet to the people of France after fire gutted the Notre Dame Cathedral.

Some social media users described the president as a hypocrite for failing to address the recent floods that cost the lives of over 12 people.

The president took to Twitter to commiserate with France but Ghanaians are not happy about his tweet. 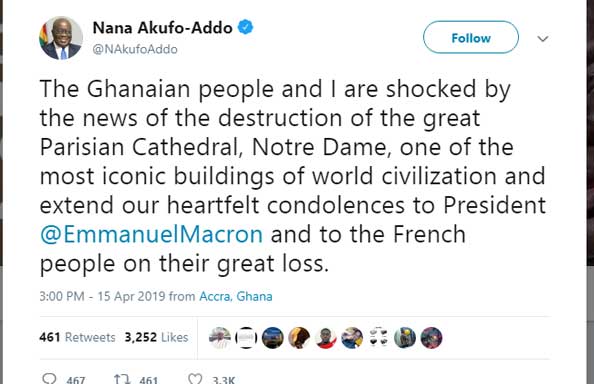 ALSO READ: I was slapped by Nana Ama McBrown 6 times on set -Kompany

Below are some comments from Ghanaians expressing anger and dissatisfaction over the president’s tweet.

PapaQuasy wrote; “Why is the presidency of Ghana so quick in sending commiserating messages to foreign nationals when natural disasters befall them but can’t do same for its citizens? Over the past week, about 10 Ghanaian lives lost thru rains, and no message from the presidency and here they are”.

Deborah Busumbru also stated; “You’re so fast to tweet when something happens outside Ghana but it takes days, sometimes weeks to tweet about things happening here.smh”

WinkyWorld commented; “You are there given condolences to uninvited issues. Ya fr3 wo? Di wo fie asem mtcheeeew! Look at how PDS is using our gadgets as consoles, I don’t know whether is grand theft they are playing or Contra?”.

Ayigbey Toffee also wrote; “Speak for yourself, please. People lost their lives and properties due the downpour yesterday but u were not bothered to send your condolences to the families instead, you’re here expressing ur shock towards another country’s loss..3y3 a diwo fie asem kakra”