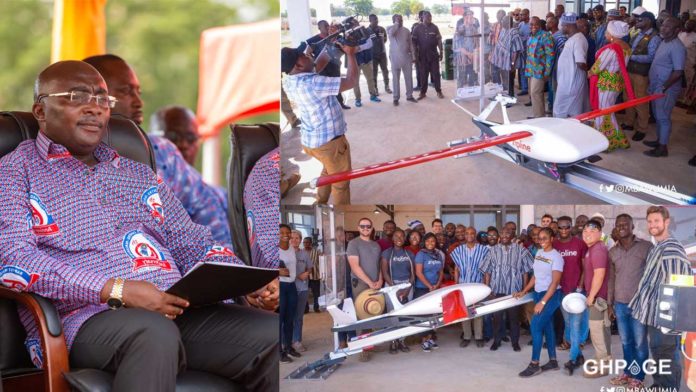 Some Ghanaians on social media are not taking it cool on the current government in power led by Nana Akuffo Addo and his vice president Dr. Mahamudu Bawumia.

Recently, the vice president inspected works at the site for the third medical drone delivery service. The facility is located at Kukua near Walewale in the North East region of the country.

According to him, the facility would host the largest warehouse under the drone program when it is completed in January 2020.

He added that it would immediately serve 60 health facilities and this number is expected to soon shoot up to 500.

The vice president added that it would be within a 100km radius in the five northern regions by the end of the year 2020.

Dr. Bawumia expressed confidence that the facility would soon complement the government’s effort in making healthcare accessible to Ghanaians.

Some Ghanaians did not, however, share in his optimism, and had strong words for him on social media:

Iddrisu Alfred: “Sadly this is the only thing you can boast off at home. You are too obsessed of JM that all your energy is tailored at attacking his hard earned reputation than bringing development to the doorstep of your people. It is sad”.

Oppong Stephen: “NO drugs available at the Various Hospital, clinic and u people are busy building drone. Mmmmm Ghana fr U”

Emmanuel Asakinaba: “Anybody praising this pointless drone delivery system is an accomplice to the wastage of our resources. Waste. Total waste….Releasing the ambulances would have made sense”.

Asante Moro Abass: “Can the drone carry human beings in case of emergency. We need ambulance not this”

Nirvana Muftawu Murphy: “No facilities for the drone to serve. Even if there’s few, kindly reshape and restock them with the required medical assistance and equipment. You should know our priorities better Mr Vice President”.

The National Communication Officer for the National Democratic Congress (NDC), Sammy Gyamfi has been arrested by the Ghana Police CID.
Read more