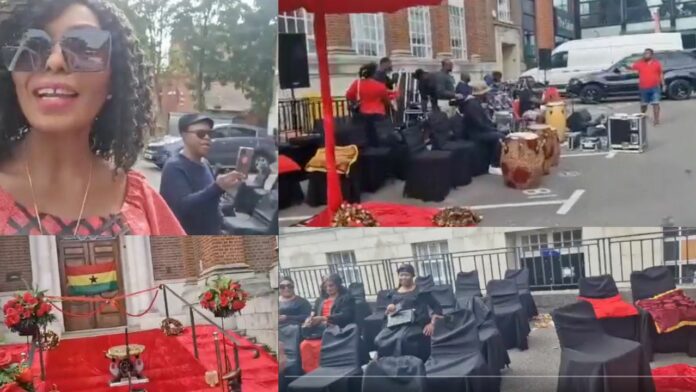 Some Ghanaians in the United Kingdom have decided to organize their own funeral for the late Queen Elizabeth II.

While the late monarch was being laid to rest at Windsor Castle, these Ghanaians at Tottenham were also prepping up for her funeral.

A video shared by one of the organizers of the funeral has gone viral on Twitter.

According to her, her Ghanaian friends and colleagues have decided to mourn the death of Queen Elizabeth separately.

Per the content of the video, they had set up a place with funeral paraphernalia, drums, and sound systems. They were clad in red and black to symbolize what their meeting meant.

Many Ghanaians have expressed angst at the video and the singular decision of these Ghanaians in the UK to organize a separate funeral from what the Royal Family has done for Queen Elizabeth.

Fadam0 wrote: The whites don’t care about what you’ve done to honour the Queen. If they catch you with no papers, Aswear u are coming

SmokedSalt wrote: These people should go back to Cape Coast and learn our history in slavery. Some of us didn’t get off the slave ship. We will always set ourselves back decades. Embarrassing.

@_mugeez wrote: If u have been blessed with money and u don’t know what to do , please remember your people in Africa . Help and support them financially because this kind of funeral will not help and it’s unnecessary