Ghanaians In ISIS: Minority demands answers from government on the Libyan report 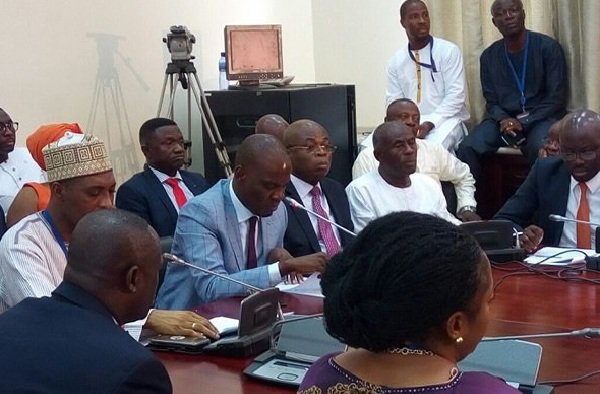 The minority in Parliament led by Haruna Idrisu, the minority leader has called on the government of Ghana to as a matter of emergency giver its response to reports by the Libya authority which alleges there are Ghanaians serving in the Islamic State terror group (ISIS)

According to a report released by the Libyan authorities, not less than 50 Ghanaians are serving in the terror group, ISIS, which is causing havoc in the Libyan states and other states in that region.

SEE DETAILS: There are over 50 Ghanaians currently fighting for ISIS – Libya officials reveals

Speaking to the press, the minority in parliament demanded that the government provide the needed assurances to Ghanaians and Ghana’s international security partners that this matter is receiving very high-level attention within a Ghana Libya Counter Terrorism Framework and the global fight against terror

PRESS CONFERENCE BY THE MINORITY IN PARLIAMENT ON THE LIBYAN ATTORNEY GENERAL’S ISLAMIC STATE INQUIRY AND ITS RAMIFICATIONS TO GHANA’S SECURITY AND INTERNATIONAL IMAGE.

Good afternoon ladies and gentlemen of the press.

We consider it an honor to warmly welcome you to this press briefing.

The Minority in Parliament has obtained and studied the report of a special inquiry commissioned by the Attorney General of Libya after the recent NATO-backed liberation of Sirte from the so-called Islamic State also known as Daesh.

We have taken a keen interest in this report because Ghana is mentioned a number of times and in ways that it would not be in our collective strategic interest to ignore. We shall return to the specific context in which Ghana comes up later in this presentation.

The report, however, details crimes committed in cities across Libya by the terrorist group. The Attorney General’s inquiry did also shed light on the inner workings of the terrorist organization in Libya including its “government structure, leadership organogram, funding, and membership”.

At a Press Conference in Tripoli, Libya a few days ago, precisely on the 28th of September, 2017, Head of Investigations at the office of Libya’s Attorney General, Al-Seddiq al-Sour presented highlights of this much-awaited inquiry to the international media.

According to al-Sour, most of the current revelations were obtained from confessions of captured Daesh fighters who have now been detained by Libyan authorities.

The content of the report which is generally troubling has revealed that contrary to previous speculations, the notorious emir of IS’s branch in Barqah (eastern Libya) is still alive and believed to be operating in Libya’s central region deserts, that IS’s government structure created a Diwan (Ministry) for ‘Borders and Migrants’ which is led by the dangerously elusive Hashem Hussian Abu Sidraha a former member of Al Qaeda in the Maghreb and Darnah’s Abu Salim Martyrs Brigade while Al-Mahdi Rajab Danqou is IS’s Defence Minister both of whom are still alive.

The inquiry provides fresh insight into the attack on the US Consulate in Benghazi, the Manchester City bombings, Eretrian killings, the beheading of the Egyptian Copts and where they were buried.  The mystery surrounding over 200 assassinations including that of former Libyan Attorney General Abdulazizi al-Hassadi, former head of Benghazi Security Directorate Faraj al-Dressi and the two Tunisian journalists Sofiene Chourabi and Nedhir Ktari amogst others appear to have been resolved.

This inquiry has additionally exposed Daesh’s funding sources which include revenues from kidnappings, control of State-owned enterprises and factories, drug trafficking and its latest modus operandi of bank robberies – 7 in Sirte alone with one involving $54 million.

While it is obvious to us that many Governments and intelligence agencies across the world would find the content of the Attorney General of Libya’s inquiry very disturbing, we in Ghana ought to be even more concerned due to the revelations made about our dear country.

Without hesitation and before proceeding further, the Minority will like to stress that we have, after careful consideration decided on the importance of striking a fair balance by the need to avoid creating panic among the Ghanaian citizenry, the need to limit how much information we put out at this stage for obvious national security reasons and the obligations imposed on us by our constitutional mandate to help preserve the security of the State and the safety of Ghanaians we represent in Parliament. This is what is done by responsible members of the legislature everywhere in the world and it is this principle that guides us in this present context.

It must also be understood that the outcome of the inquiry conducted by the Attorney General of Libya’s office is no longer classified information. The key findings have already been presented to your colleague international journalists who were present at the 28th September 2017 press conference in Tripoli, therefore, adopting silence or playing the ostrich cannot be a responsible approach given the circumstances.

As we will all agree, good patriots and nationalists who care about the image of their country and the security of their fellow citizens do not sit idle when their country’s name has been brought up publicly in the most uncomplimentary and frightful terms as has been done by this Libyan report.

According to the Libyan Attorney General’s Chief Investigator, Al-Seddiq al-Sour, Ghanaian migrants feature prominently as members of the so-called Islamic State in Libya.

At al-Sour’s press conference which was delivered in PowerPoint, he placed emphasis on a particular slide which categorized the foreign members of Islamic State in Libya into four groups and according to their population. (We hereby present to you a copy of this slide)

Rather worrying for Ghana, we are considered to belong to the second highest category of 50-100.  This has been explained by the Attorney General of Libya’s office to mean between 50 to 100 Ghanaian migrants in Libya have been identified as active frontline fighters of ISIS in Libya. Ghana appears in this category with seven other countries namely; Senegal, Gambia, Chad, Niger, Eretria, Mali and Somalia.

Only four other countries; Tunisia, Egypt, Sudan and host nation Libya who all belong to the first category of 100 and over, were found to have more Islamic State fighters than the category Ghana finds itself.

What is more unnerving; the special inquiry found that kidnappings of expatriates were mostly carried out by Islamic State foreign fighters from Ghana, Turkey and Tunisia.

This dreadful report, highlights of which was presented to a packed room of international journalists in Tripoli a few days ago must necessarily trigger a number of immediate actions from our Government – actions which all Ghanaians must demand in our collective national interest.

To this end, therefore, the Minority makes the following demands:

Government must publicly react to this inquiry by the Libyan Attorney General’s Office due to its grave ramifications to Ghana’s image.

Government must provide the needed assurances to Ghanaians and our international security partners that this matter is receiving very high-level attention within a Ghana Libya Counter Terrorism Framework and the global fight against terror.

Government must take steps to ascertain to what extent the Ghanaian nationality claims in the report is accurate.

Ghana’s national security apparatus must exchange intelligence with their Libyan counterparts on how these Ghanaians if indeed they are Ghanaians are being recruited and radicalized with the view to eliminating all such threats and conduits.

Government must put measures in place to ensure that none of these alleged Ghanaian Islamic State fighters are allowed to return to Ghana without strict security clearance and surveillance.

Government should consider establishing a generous and enticing reward scheme for families, friends and loved ones who volunteer vital and credible information on any known ISIS ties of their loved ones either living in Libya or being recruited to go to Libya.

Government should provide details of all steps it is taking to work with other friendly countries who have previously provided intelligence support to monitor all terrorist recruitment activities and what steps it is taking to deal with the challenge to a joint Parliamentary committee of Defense and Interior and Foreign Affairs so that the people’s representatives can be assured that government is taking all necessary steps to protect the Ghanaian people.

The government should explain what steps are being taken to provide public information on how terrorist recruitment is conducted in order that citizens can be aware of how the “signs of radicalization” in our young people should be looked out for.

The government should engage religious leaders of both Moslem & Christian groups to get them to reach out to their congregations and develop programmes within their organizations to create awareness of attempts to radicalize young people and to prevent them from falling prey to ISIS propaganda.

This is not the time to panic. It is the time to work together and to look out for each other. We are confident that with the right collaboration and strategy which harnesses the contributions of all Ghanaians including our experts, we are more than capable of eliminating all known threats to our territorial integrity and collective wellbeing.