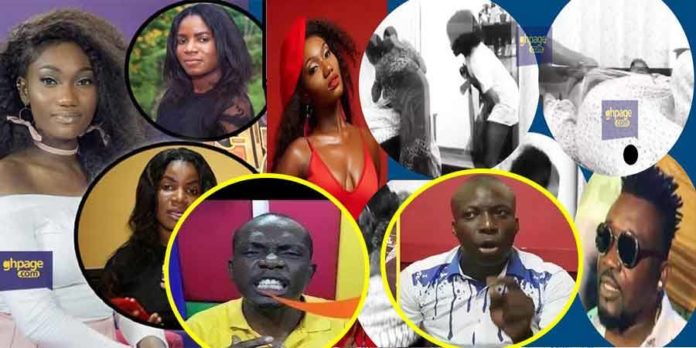 Ghanaian woke up last week to hear a viral audio of a lady purported to be the girlfriend of Ruff Town label boss Bullet whose real name is Ricky Nana Agyeman storming his house to surprise him only to meet his artiste Wendy Shay naked on Bullet’s bed.

In the audio, the lady revealed that she once saw him sleeping with late Dancehall sensation Ebony Reigns and another White lady. The mention of Ebony’s name raised eyebrows as her dad came out after her demise to state that Bullet was taking advantage of her daughter whiles alive.

Also Read: Watch the video of when Wendy Shay was caught fvcking Bullet

Fast forward to yesterday, Wendy Shay and Bullet who have been quiet after news of their affair went out released a video of the event but to the surprise of many, it was a publicity stunt for their yet-to-be-released movie which according to Bullet talks about all allegations leveled against him including Ebony’s dad Nana Opoku Kwarteng.

This made Ghanaians including controversial person Counselor Luttorodt and Prophet Kumchacha bash them for releasing their alleged “sex-tape” to get the public talking when they know the whole incident was fake.

Some section of the think the new video released by Bullet is just a cover-up for the real incident because the audio and the video for the same event where different and doesn’t make sense.

Watch the video of the public reaction below:

SEE MORE: Bullet reacts to all allegations leveled against him