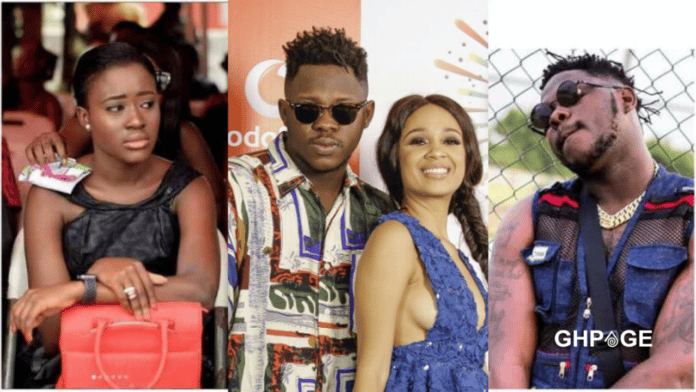 Ghanaian actress, Fella Makafui and her husband, Medikal have kept their fans in a state of confusion after they both shared cryptic messages on social media to fuel their divorce rumours.

The speculation that the power couple has divorced gained more traction on the internet days after Medikal’s Twitter account got suspended for impersonating the president of the Republic of Ghana, Nana Addo Dankwa Akufo-Addo.

Following the unfortunate incident, the “YOLO” actress tweeted about making the hardest decision of her life.

“Wives should be respectful, submissive, appreciative and stress-free,” the text from Medikal read.

Just this morning also, both Medikal and Fella Makfui deleted all the posts on tier IG pages.

After the deletion of the posts, Medikal then shared another post to confirm that no matter what happened between him and Fella, their daughter will be fine and be well taken care of.

For Medikal to speak about her daughter clearly explains how far the two have decided to go to supposedly end their marriage and go their separate ways.

Amidst all these, social media users who are keenly following the whole brouhaha have shared their sentiments and a majority of them believe Karma is mercilessly dealing with Fella Makfui.

Citizen Wise – Thank God the opportunity have been waiting for

Ama Afro Kwabi – In this life we have to be Patient, everything has will make sense with time. life has a way of judging issues. Lets see How karma unfolds!!!

As we all know, Fella Makafui snatched Medikal from Sister Derby at the peak of their affair.

In the early days of Sister Derby’s break up with Medikal after he started a new relationship with Fella Makfui, the African mermaid alleged that Fella gave Medikal a hot blow job after an outdoor event somewhere in the capital and that was the beginning of the end of her affair with the rapper.

READ ALSO: Is Medikal and Sister Derby shooting a music video together secretly?

Derby revealed this in an interview with Lexis Bill on Joy FM. Admittedly she stated that the blow job Ayigbe Beyonce gave MDK was the catalyst for their failed relationship.