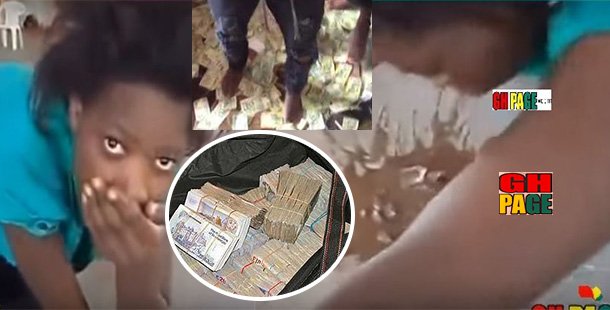 Ghpage.com, today, brings you the story of a 19-year-old Rebecca Ankobea, who on the premises of the church, Building Faith Ministry International (BFMI) vomited close to GH¢50 in GH¢5 and GH¢1 denominations, as well as coins in 50Gp and 20Gp denominations.

When the Daily Graphic visited the church Rebecca,— who was wearing a brown long-sleeved dress and spotting a scruffy hair, was lying on a mattress in the church auditorium.

To prove that the story was not a fabrication, the church made available a number of videos showing her vomiting some of the items.

In one video, she vomited nails; in another, she threw up broken bottles, while in yet another there was a folded GH¢1 note.

In several of the videos Ghpage.com has seen, she could be seen wincing in pain and agony, crawling on the floor, suffering a coughing fit before vomiting some of the items.

According to Rebecca’s family members,they pointed accusing fingers at unknown kidnappers or ‘sakawa’( ( internet fraudsters/money ritualists) ritualists who, they believed, had kidnapped her at Kasoa in the Central Region and attempted to use her for rituals but failed.

READ ALSO:Video: Two Sakawa Boys Goes Mad On Street As They Hold Ritual Snakes To Vomit Cash For Them

“The things she is vomiting are quite scary. I have never seen anything like that before. We went to several places to look for her. We thank God that she is alive.”

She claimed that a day before Rebecca was found, they had attended a prayer session at the BFMI, where they had been told that she would be found.

The Rebecca story — narrating her ordeal

Narrating what she claimed to be her ordeal to the Daily Graphic, Rebecca said on the day of her kidnap, she had been sent to the Kasoa Market by her aunt to buy a mortar and a pestle.

“I picked a trotro by the roadside when I was returning home. On the way, I told the driver I would alight at Just Love Bus Stop. Immediately a lady sitting beside me used her elbow to hit me in the face, before using a handkerchief to cover my face. I didn’t know when I lost consciousness.

“When I regained consciousness, I was in the bush, with my hands and legs bound together. A man came and ordered that they should untie me and kill me. They stabbed me a number of times but nothing happened,” she narrated.

She said when the man realised that nothing was happening, he ordered his colleagues to send her away.

“They hit me in the face on countless occasions and gave me something to drink before dumping me somewhere. When I regained consciousness again, my thighs were swollen and I was in pain,” she added.

Interestingly, there was no major marks on her, except for a small scar on her thigh. She, however, produced a tattered blouse and a pair of trousers that were severely torn on the chest and thighs.

She said she later managed to crawl to the roadside where a Good Samaritan who found her in a wretched state asked about what had happened to her.

“The man gave me his overcoat, GH¢2 and then put me in a taxi heading to Kasoa. The taxi driver took me home when he saw the state in which I was. When I got home, I couldn’t talk. My parents then brought me to the church,” she said.

She said anytime she wanted to vomit, she could feel aches in her stomach, with something pinching her in the stomach.

“I still have nightmares of what happened when I sleep. I see them chasing me,” she added, with a serious look on her face.

The Head Pastor of the BFMI, Pastor Simon Narh, said when Rebecca’s aunt brought her to the church, she could not talk.

He said it was during one of the church’s deliverance services that he had a revelation there were many things deposited in her.

“Last Wednesday I had a revelation that I should give her anointing oil to drink. So I bought one, prayed over it and gave it to her to drink. Two days later, she began vomiting these items,” he said.

READ ALSO:Sakawa boy dies after going against a rule not to touch water

The pastor claimed that since Rebecca could not be killed, the intentions of her assailants were to give her something that would either kill her or make her mad.

She advised the public to be extremely careful about the kind of vehicles they boarded, since “there are evildoers who are after blood for their rituals and other evil deeds”.

Also,three Sakawa boys narrates their ordeal,claim they Have $2 Million But their Lives are In A Living Hell