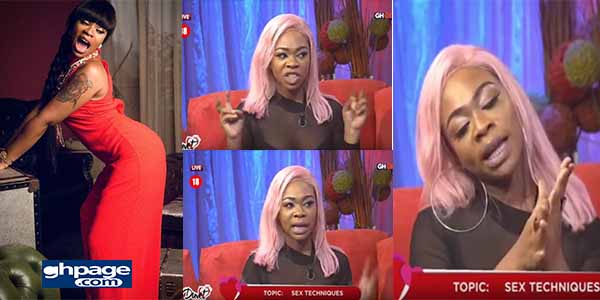 Ever since Shatta Michy’s relationship with Shatta Wale became public; she has been involved in one controversy or the other. She was recently accused of being a prostitute and a lesbian in January by Ara B who uses the Facebook name Rashad Sfarijlani

Rashad posted one of those provocative photos of Shatta Michy and wrote that the wife of Ghana’s self-proclaimed dancehall artiste gets f*ck by friends of her husband in club toilets.

However, the Cheating singer, real name Michelle Diamond Gbagonah speaking in an interview with Showbiz indicated that she does not do girls and she is solely into men.

read also: Shatta Michy Takes Up A New Job After Her Break Up With Shatta Wale

“I do not do girls, I heard that rumour too, it was a video that showed that a fight broke up in a club where I was and all that but no I am not into that. You know because of who I am, you go to places where fans want to Snapchat with you so I am sure it might have been one of those moments, where probably I had gotten close to the person and someone gets it on his or her snap and then I am seen as a lesbian,” she told Showbiz.

“I am a lady with different personalities depending on the mood. Sometimes I am a tomboy, at other times I can be an introvert, a nerd and oh I love to read a lot so yes I can be studious. Again I can be the crazy fun person the next minute.”

read also: Michy and I are destined to be together forever – Shatta Wale

“But that doesn’t end there, when it comes to my home, I love to clean, you can call me the cleaning lady. I am the type that would want to strip and get on the floor and clean. I love to keep my things as neat as possible and white.”

“I love cooking too, though I don’t eat much I love to cook. Then again, I am a tailor on the other side too, yes, I sew for men, I am just an embodiment of many things. I learnt to be independent at a very young age and that has been it. I cannot be easily broken.