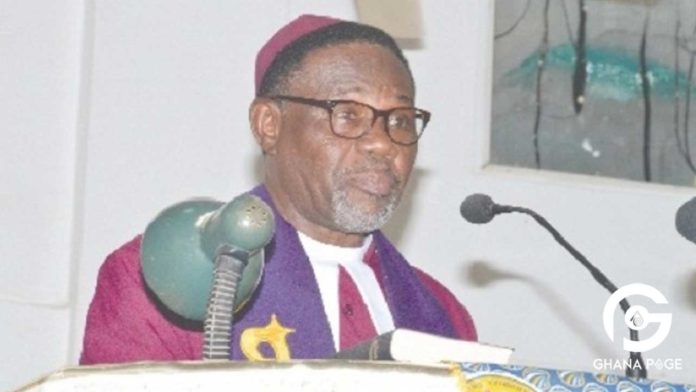 The former presiding Bishop of the Methodist Church Most Reverend Titus Awotwi Pratt has lashed out at Ghanaians for their attitude towards people who steal huge sums of money as well as those little things for survival.

According to the man of God, the ‘real thieves’ are the big men in state institutions who flaunt their ill-gotten wealth in the face of people but are walking freely through town and even have drivers who drive them through town.

He, on the other hand, made mention that the ones who rather steal a bunch of plantain just for their survival are rather thrown into jail to suffer.

Speaking at the one-year anniversary thanksgiving service of the Consolidated Bank of Ghana (CBG),  Most Reverend Titus Awotwi Pratt said “People who earn more and better way of salary and free/fringe benefits, occupying official houses with chauffeur driven cars, benefits come in thousands, they steal the most in the country”

Using the prisons as an example, he bemoaned that the prisons are choke because people who committed some menial offenses are sentenced and sometimes remanded in prison custody whiles the Politicians who steal and loot the state are free walking about with no one to question them.

“Go around the prisons, as we go around to give communion, ‘he has stolen a fowl’, ‘he has stolen a goat’, some in remand for years, yet those who openly steal and plunder walk our streets, what kind of society is this?”, he quizzed.

He also expressed worry about the proliferation puppets of politicians in the security agencies which is making it impossible for them to discharge their duties professionally gradually driving the hitherto vibrant country into a failed state.

“Go to civilized countries, certain positions, people are there because of their merit, not appointed by politicians and they work and serve well. Look at our security agencies, puppets of the ruling government and so they are not able to open their mouth, even arrest thieves who ride public cars and are fed by the state”, he concluded.