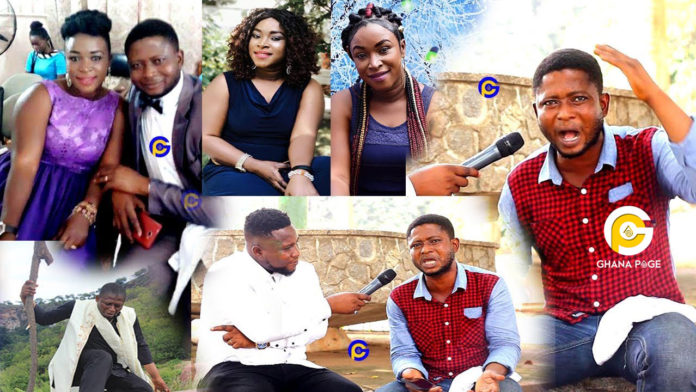 Multi-talented Ghanaian, Joseph Mensah popularly known as Anadwo Bogya is the crooner of the famous Gospel song “Anadwo Bogya” and many other viral songs.

SEE ALSO: Photos of Vanessa, the Slay Queen who was rebuked by her mum for going nu*de in pono movie (+Audio)

Joseph Mensah is also a popular Kumawood actor and producer who has produced a number of hit movies in the Kumawood movie industry.

He married his wife, Megalina at a very young age and they have produced 3 beautiful children. Megalina herself is a popular Gospel musician in Kumasi.

Sadly, another Gospel artist based in Kumasi called Big Ernest has snatched Megalina from Joseph Owusu.

This was after Big Ernest sent his wife abroad to stay there and work for a living. This was after Mega (Megalina) worried Joseph Mensah for years that she wants to travel out of Ghana.

SEE ALSO: Friends of the fmr wife of Obaapa Christy’s husband rains curses on her

Ghpage com has reached out to Big Ernest for his side of the story. We will keep you updated.