Government is protecting NAM1 for fear of being exposed -Ibrah One 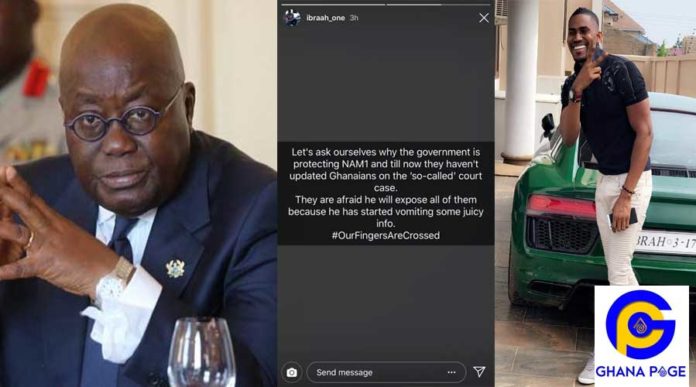 Ghanaian millionaire and businessman, Ibrahim Daouda popularly known as Ibrah One have stated that the government is protecting the embattled CEO of Menzgold, Nana Appiah Mensah (NAM1).

According to him, the government and top officials are scared of being exposed by NAM1 so they are keeping information from the public concerning his alleged court case in Dubai.

He made this assertion via social media and stated that he cannot understand why the government cannot update Ghanaians on NAM1’s ‘so-called’ court case.

It was reported by the Ghana Police Service that Nana Appiah Mensah will be appearing in court on 2nd February 2019 in Dubai but Ibrah One refuted those claims explaining that the Dubai Courts do not operate on Fridays.

The Ghana Police Service further came to explain that the above date was a mistake and that Nana Appiah Mensah will appear in court on 5th February 2019.

However, no updates have been given by the government and the Police Service concerning the court proceedings that took place in Dubai.

Ibrah One who has always accused NAM1 of being a scammer claims that the government is being silent on this issue and are not taking any sanctions against him because he has juicy information that can expose all of them.