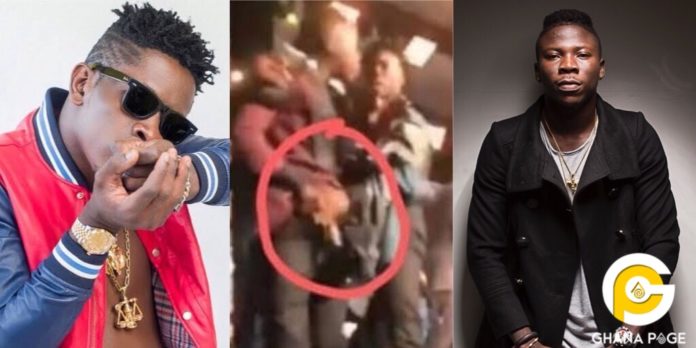 One of the most talked about celebrity beefs is the Stonebwoy-Shatta beef, their petty shades towards one another and their infamous rivalry led to the ugly VGMA fracas that almost marred the 10th edition of the annual awards show.

During the brawl it would be recalled that Stonebwoy pulled out a pistol in an attempt to warn Shatta Wale after the latter and his entourage mounted the stage whilst Stonebwoy was receiving and award Shatta Wale so much coveted.

Speaking about the brawl in a recent interview Shatta Wale has declared that Stonebwoy’s gun was only a toy gun (water gun). He defended Stonebwoy saying that since childhood Stonebwoy has been known to loving playing toy guns, so the he pistol was only but a toy gun.

“Stonebwoy loves water pistol. He is my cousin and when he was young, he used to play with water pistol so I am sure it was a water pistol and not a real gun,”

The duo have however smoked the peace pipe after it was brokered by Nana Abban in conjunction with GhOne’s Nana Aba Anamoah. Despite burying the hatchet, the two are currently being tried in court for criminal and civil charges levelled against.