Did Ray Moni poison Guru?? ~Guru Details How He was Poisoned By A Very Close Friend 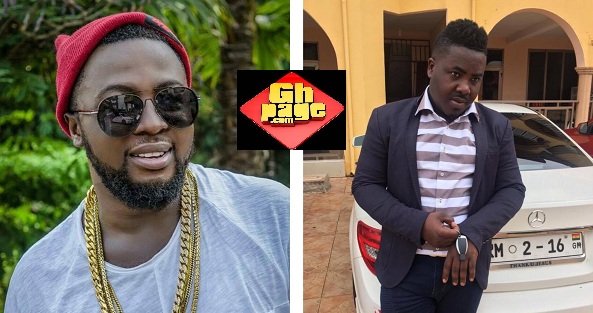 The NKZ boss and Hiplife artist, Yeboah Agyei Maradonna popularly known as Guru has revealed how he was poisoned by a very close friend through food which nearly destroyed his music career.

The ‘Lapaz Toyota’ crooner speaking on the Delay Show explained how a very close friend who he refuses to mention his name poisoned his food with Juju to cripple his music career and how he vomited it out through prayers by a certain man of God.

According to the musician, he started having some strange feelings inside his body and also he began to experience breaks in his voice whenever he mounts platforms to perform.

The Hiplife artist further revealed that it was through the intervention of his family and a pastor that saved him. He recounted how he vomited the black object during an intense prayer.

He admitted he knows the person who poisoned him but he refused to mention names and that is where Ghpage.com team comes in.

Not long ago, The management of Guru released a statement that they are no longer working with his manager Richard Amankwah popularly known as Ray Moni. According to the statement, they parted ways amicably after the two-year contract signed between them ended.

SEE HERE: It’s Official: Guru and Manager, Ray Moni Go Their Separate Ways And This Is Why

But Ghpage.com reported after the break up that, they didn’t part ways amicably as they are trying to make the public believe. And the report further promised to get to the bottom of this issue. Well, Ghpage.com has answers and more questions.

Ghpage.com source close to the management of the artist revealed on anonymity that the NKZ artist and Ray Moni were having a lot of issues. Guru accused Ray of staling his career.

To him, Ray wasn’t doing enough to project his image despite the fact that he is talented and has what it takes to compete with the best in the industry.

The source further disclosed to Ghpage.com that Guru claims Ray Moni was only good at securing gigs for him in villages in the Brong Ahafo Region.

SEE ALSO: Guru deserves an olympics gold medal,for being the smartest “stealer” of our time

Ghpage.com discovered that Guru was so angry that he swore he will never perform on any show in the Brong Ahafo Region for the next 5 years because of his dwindling fame in the Region that was once his stronghold.

But Ray Moni in his defense stated that he actually made Guru who he is today so the attitude and anger being displayed by the artist is misplaced and an act of betrayal.

Ghpage.com also gathered that the NKZ Boss and Ray Moni also had issues with Money sharing. It appears Ray Moni felt he is being cheated by his artist in so many deals

“The arguments and quarrels between the two former best friends became too often that Guru had no choice but to sack Ray Moni as his manager” The source stated.

Now Ghpage.com has few questions:
• Why is Guru now revealing to the public he was poisoned with Juju barely a month after he sacked Ray Moni?
• Why has Ray Moni been throwing silent shades at his former artist on Social Media ever since he parted ways with Guru?
• Could it be that Ray Moni is the one who actually poisoned Guru to destroy his career for betraying him?
• Did Guru sack Ray Moni because he found out he was behind the Juju??

Only Guru and Ray Moni can confidently answer these questions. What do you think? share your opinions in the comment section.