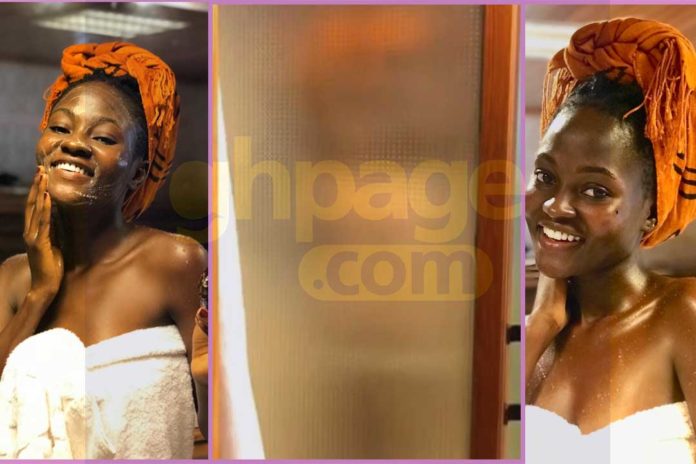 Miss Ghana 2006 Hamamat Montia is currently setting the internet on fire after she posted a raunchy video of herself having fun in the bathroom.

According to what we gathered Hamamat recorded the video in her bid to promote her black soap which she says is natural and medicinal.

In the video sighted the Miss Ghana was seen through a blurry glass door dancing to a song and she later came out to advertise her “African Black Soap” were she stated cures acne and leave no blemishes.

Another part of the video shows a puppy come close to a red panty lying on the floor, smelled it, and took it and ran away with it.

The puppy’s action is quite interesting because in Ghana it is commonly believed that dogs are mostly attracted to smelly things, especially shoe and socks.

Also Read: Man with no legs and hands draws an exquisite portrait of Samira Bawumia

After posting the video some fans shared their thoughts on the video with some asking she deletes the video from social media.

Some also decided to share their view on the dog and pant part in the video.

walk_in_online: “Should I just pretend I didn’t see the dog smell those panties and then took it away? I think I would just do that.”