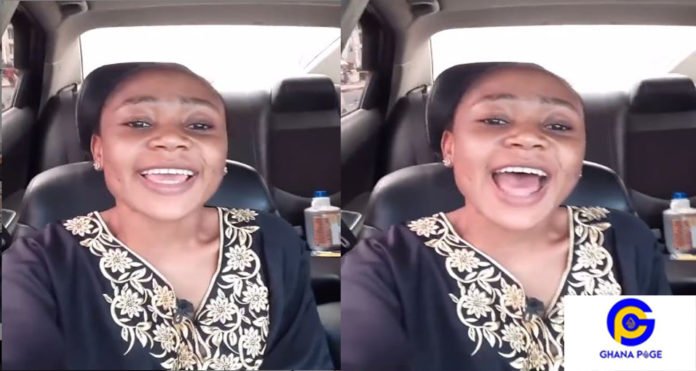 A few minutes ago, Ghpage.com reported that in a desperate attempt to promote her first music single, Akuapem Poloo has posted an almost naked video on social media.

In the video, the controversial honey seller nearly stripped naked revealing very sensitive parts of her body to her followers.

The attention-seeking celebrity in the video is seen jamming to her single track and nearly put her ‘toto’ on display as she raised her maternity dress to amuse her fans.

However, after sharing the naughty video on Instagram, it has become one of the top trends on Instagram as over one million people have viewed the video in less than one hour.

Reacting to the video, Akuapem Poloo has posted a new video on her Instagram page punching hard on her critics.

The self-acclaimed brand ambassador reveals that though people always claim she is naughty and crazy but they keep on viewing her post as she now has most of the views on IG within an hour.

She further advised people to keep on following her because she is always available to give them the crazy views they desire to see.

Posting the video on Instagram, Akuapem Poloo captioned it: “HATER can keep on insulting I don’t give a fuck #sexypoloo 1million in just 1 hour???.”

Ghanaians have now been tagged as a very interesting and hypocritical breed of people who openly claim they hate and abhor negative things but in reality, they patronize negative news more than any other thing in this world.

It is also amazing how an Instagram page that has less than 200,000 people following hit one million views in about an hour.