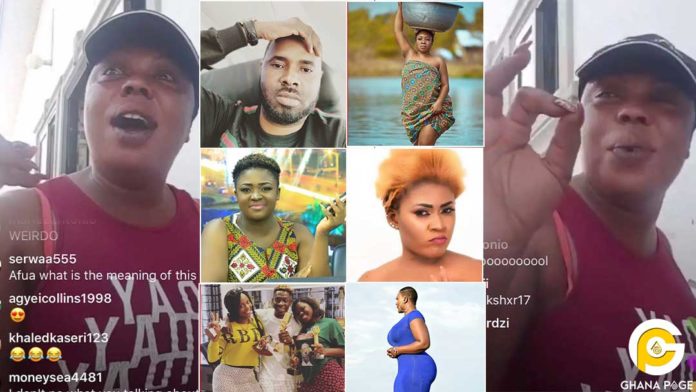 Afia Schwarzenegger singing to Ernest Opoku’s popular gospel tune ‘Onyame di hene’ the comedienne added that whiles he was singing that song he will be using it to sleep with women.

She continued, Ernest has slept with Nayas and re-echoed Tracey Boakye’s statement that though Ernest is a cheat, he is very good in bed.

Having slept with Nayas, Tracey Boakye, Mary Waddle, among others, Afia claimed one woman has release Ernest Opoku’s sexual escapades in Germany to her.

On Ernest rampant bonking spree in Germany Afia disclosed that the singer sleeps with women rough —and that she has in her possession about 10 videos and audios of the gospel singer philandering but it’s not that important to her to release them.

She added that she isn’t the one to destroy the work of God unless the person (man of God) is fooling too much.

“Most of the women Ernest has slept with have even come out to expose him, so I am not even the one to do it. Ernest has indeed slept with a lot of women.”She added

On Moesha Boduong, Afia stated she thinks she has gotten a talent in ‘ashawo’ (prostitution) but it is not. She claimed she won’t go and hung herself because Moesha lives in a doggy style— and keep sleeping with older men to survive.

She also said Shatta Wale can sing even in vulgarism and still get a hit which some pastors will prefer to play that in a church.

Last year, the names Ernest and Nayas went viral after the former who is an actress went to the studios of Adom FM to attack latter with canes.

After the incident, it was revealed that Nayas had gone there to assault the singer because he had impregnated her but refused to accept responsibility.

After the incident, Nayas, on several platforms, revealed details about her love relationship with Ernest Opoku.

READ ALSO: Meet all the celebs gospel musician Ernest Opoku has slept with

Later on, several revelations came up as to the number of women in the industry the gospel singer has slept with which mentioned Tracey, Mary ‘Waddle’, and fellow gospel singer, Francisca Sarpong.