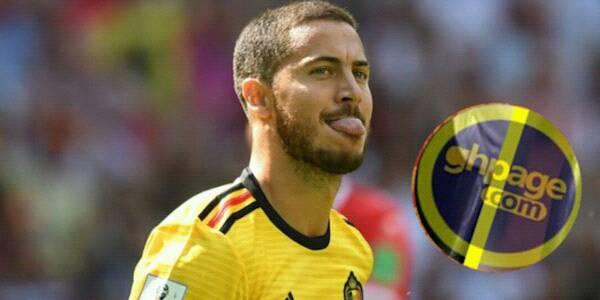 The LaLiga champions, Barcelona are willing to smash the British transfer record to land the ex-Lille forward, who is currently on a contract at the West London club ‘Chelsea‘.

After missing out of Atletico Madrid’s Antoine Griezmann, Barcelona are now exploring the possibility of signing Hazard.

However, Eden Hazard is supposedly the choice for Barca – although Real Madrid also wants him – while Eriksen is all set to remain at Tottenham with Ousmane Dembele possibly set to leave the club ‘Barcelona’.

According to reports, Hazard has reportedly agreed to sign for Barca and will move in a £80million deal.

Eden Hazard who is currently at the 2018 World Cup in Russia with his country’s national team as the captain is set to face off England come Saturday for third-place playoff after been beaten by France to make it to the finals.

The 27-year-old Belgium playmaker had publicly stated that he will not rule out a move away from Chelsea.

The forward had also called on Chelsea owner, Roma Abramovich to sign new players that can win the Premier League and Champions League next season before he will make his decision on whether to extend his stay at the Stamford Bridge or not.

When Hazard was questioned about the progress over a new deal at Chelsea, Hazard told reporters: “I’m waiting for new players next season. We’ll see.

“I want good players because I want to win the Premier League next season.

“Yeah, [I have to think about] a lot of things, and then we will see. That’s why I’m taking my time. It’s something big.”

“Trophies are important. FA Cup, League Cup, Premier League, Champions League. You know? And it’s more important for me because I’ve never won this one. That’s why I want to win.”

Hazard’s current terms expire in 2020 and Barcelona can crank up the pressure on the Blues to sell.

They know Hazard’s value will drop dramatically when if he gets within a year of his deal expiring, which gives Chelsea a massive dilemma on whether to cash in.

Kobe Bryant and his 13-year-old daughter Gianna were buried in a private funeral service in Orange County, California last Friday, according to...
Read more
Sports

A Ghanaian footballer identified as Samuel Asamoah who plies his trade in the Belgian league has been handed a red card for...
Read more
International Sports

Kobe Bryant, the NBA superstar has been confirmed dead. He died in a plane crash in Calabasas this Sunday morning. According to reports, Kobe Bryant...
Read more
Sports

Earlier in the day, CAF organized the draw for the 2022 World Cup Qualifiers and it seems there will be some giants...
Read more