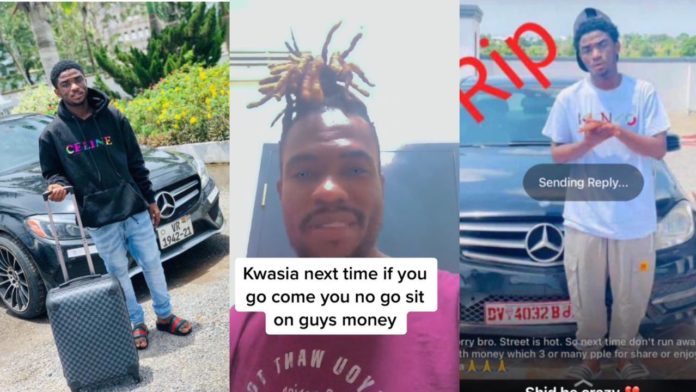 A gentleman has come out to speak about the killing of Kwabena Asumadu, a student of Oyoko School of Dispensing Optics.

This sad event occurred Tuesday evening 19th July 2022. Kwabena met his untimely death shortly after dropping off his friend at Sofoline around 11 pm.

The dead, who was driving an unregistered Mercedes-Benz, was shot multiple times by his assailants through the driver’s side.

He was returning to Offinso when the unfortunate incident happened. Kwabena sustained gunshot wounds to his neck and head before dying. Police sources say nothing was stolen from him.

Many had intimated that his death or murder was an act of revenge which was carried on him by his partners in the online fraud business.

On the back of that, a gentleman has come out to clear the air. According to him, Kwabena Asumadu deserved his death due to his greed.

“He deserves to die. You don’t hoard money we are all supposed to share. I support the killers,” he said.

However, it has been revealed that Kwabena Asumadu was a part of a clique of Gameboy (a local name for Yahoo boys) or internet fraudsters who had won huge money.

The money was supposed to be shared amongst the four members who according to the report, worked hard to make the money.

However, it has been reported that Kwabena Asumadu absconded with the money, bought himself a Mercedes Benz and relocated from the area.

The police are still investigating the case.