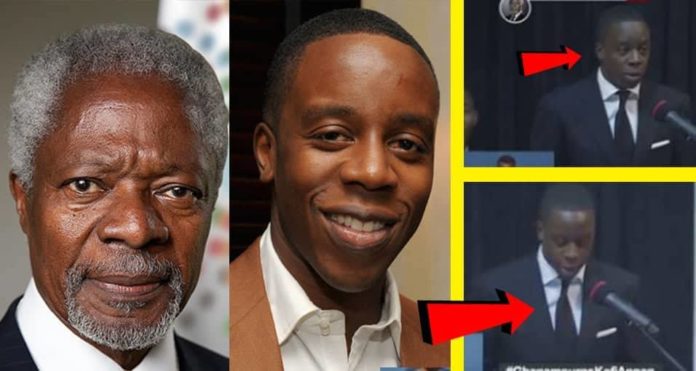 The children of the late former UN Boss, Kofi Atta Annan, struggled to hold back their tears as they paid emotional tributes to their departing father.

Kojo in his tribute said their father was a good man and always welcoming to everyone he met.

According to Kojo Annan who had earlier cried at seeing his father’s body, their father spoke the truth and was very peace-loving.

“This morning my eldest son “Atta” started his second-year nursery. As he held my hand on the walk to “school”,

I was suddenly struck with both tremendous gratitude and deep sadness. As a little kid, as a young man and as an adult you carried me on your shoulders – physically, emotionally, materially, psychologically, spiritually.

You took all my needs upon your broad shoulders, whilst at the same time carrying the world’s problems.

It is thanks to your 45 years of guidance, wisdom and counsel that my shoulders were made ready to carry my family.

I thank God that the love and the profound bond we share transcends space and time.”

Kofi Atta Annan, a diplomat from the West African country of Ghana, was the first to emerge from the ranks of the United Nations (UN) staff to serve as the Secretary-General of the UN.

He served as the seventh UN Secretary-General from 1997 to 2006. The UN and Annan were jointly awarded The Nobel Peace Prize 2001 “for their work for a better organized and more peaceful world”.

Watch him read the tribute below…

Social media is presently flooded with a lot of tributes and farewell messages from Global Superstars to the late Kobe Bryant following...
Read more