Gariba claimed to have done a song and through his prayers helped released internet sensation Supa aka Ghana 2pac from Nsawam prison. He said, Ex-president Mahama released about 900 prisoners some time ago and Supa was among. 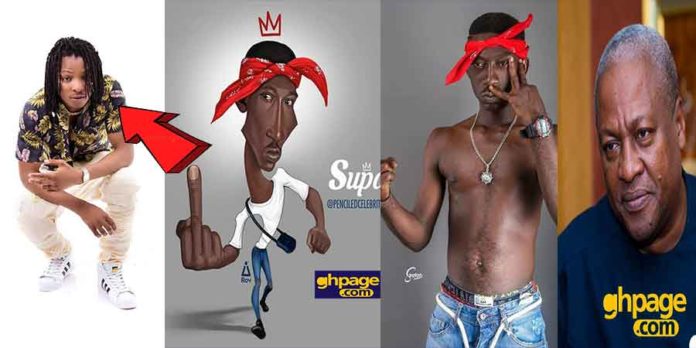 You will hear Gariba’s name in almost all the freestyles we’ve heard the internet sensation Supa aka Ghana 2pac has done.

“Many say I talk sense, wey Gariba dey make concert. Watch me, Nima is my residence, if you arrest me, no evidence. Wey, I walk with legends because I am more than expensive. More than Wisa diss, Gully Bop, me I get some lyrics….F*ck Gariba ..” Then he will continue with his weird walk.

Gariba revealing why Supa always ‘diss’ him in his freestyle he explained that he was the one helping Supa until he got arrested during a police swoop in one of the Nima ghettos.

In an interview on Hitz FM with Andy Dosty, Gariba revealed that swoop landed Supa in Nsawam prison.

“Supa found himself at the wrong place which there was a scatter and they took him to Nsawam” He stated.

But as someone who has the gift of saying things before they happen or make an impact with his song propagated the release of Supa through a remixed song he did with Rudebwoy Ranking.

“Through the song I prayed, they got freed so all of us will come and enjoy this sunlight together. Luckily I did that song during the Ramadan and it was within that time former president Mahama released about 900 prisoners and Supa was among” Gariba disclosed.

According to Gariba, Supa was his fan when he was in prison so the moment he got released, he came looking for him.

“He will be like, where is Gariba. So from there, he started doing his rap trying to mimic me. Started doing me…When Supa came, I was his idol and he started to be like me. Even all his punchlines you people are feeling now, most of them are my words.” He revealed.

Then why is Supa dissing Gariba now?

To that, Gariba explained, when Supa tried all his best to sound or rap like him, people started comparing them. And that comparison started to get Supa furious and he will come out with the word ‘F’ Gariba which mostly got people laughing like we are seeing now.

So in a nutshell, that’s where all the dissing started from. Moreso, Gariba, believes Supa feels he didn’t help him enough, thus the shades.

Gariba, according to his profile is also a rapper based in Nima who has featured top Ghanaian musicians like Edem, Stonebwoy in his songs.