Here is Kenneth Asare, the man responsible for all canopy walkways in Ghana 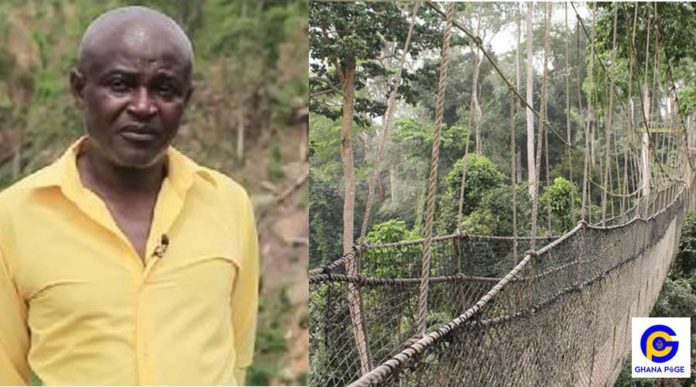 The Kakum National Park, Legon Botanical Gardens and Kintampo Waterfalls are popularly known for their canopy walkways but one question lingering on the minds of Ghanaians is ‘Who built the walkways’.

Well, the famous walkways that serve as pedestrian access to a forest canopy were built by a  Ghanaian identified as Kenneth Akufo Asare.

All the famous walkways in the country were built by Kenneth Akufo Asare who hails from Akyem Maase in the Eastern Region.

According to Kenneth, the Central Regional Secretary of the PNDC, Ato Austin was on a visit to Malaysia and saw a canopy walkway and decided to do the same thing he Ghana.

He was later directed to the Canadians whom he brought to Ghana to begin the construction of the walkway which started in September 1994 and ended in 1995.

However, the Canadians who were constructing the walkways were very old so they needed a Ghanaian who will help maintain the walkway when they were done.

Kenneth who was then a bird trapper at the wildlife division was appointed to assist the Canadians who taught him easy and safe ways of climbing trees.

He also learnt how to build and maintain canopy walkways and has since been doing than in Ghana and beyond.

Kenneth has built a canopy walkway at Kwara State in Nigeria, a walkway on the sea at Ave Maria Resort, a popular site in Tema which was destroyed in 2018 for the Tema Harbour expansion project.

ALSO READ: Policewoman joins forces with another to beat husband’s side chick

Presently, Kenneth Akufo Asare is working on what he describes as the longest walkway in Africa.

He added that it is a 460m long walkway in Akosonmbo and expects to complete it by the end of 2019.

According to Kenneth, he has been blessed with sixteen children and has taught 11 of them who are males how to construct and maintain canopy walkways.