“He’s the worst president, he has brought hardship on us” – Unhappy trader berates President Akufo-Addo in angry video 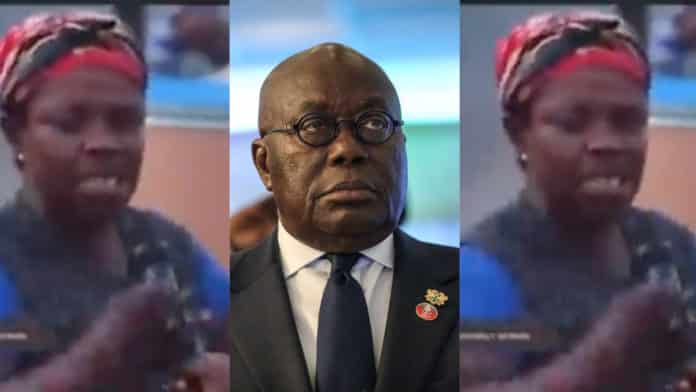 It appears there is a nationwide dissatisfaction amongst the citizenry about the output of the Akufo-Addo-led government and this has taken centre stage in the national discourse.

Many have been expressing their reservations with the current administration and have asked President Aklufo-Addo to walk the talk by implementing policies that bring some sort of respite to the populace.

That is how come an angry trader has berated the president and described him, as the worst ever. According to him, Akufo-Addo has paid deaf ears to the yelps of Ghanaians by introducing suffocating policies that robs businesses of their profits and take food out of the mouths of the poor.

In a conversation with the media, the woman vented her spleen to the president. She insisted that the hardship in the country has become unbearable. Meanwhile, she felt the president has not shown leadership by addressing the concerns of Ghanaians who queued to vote him into power.

“We are suffering, Ghanaians are suffering. He is the worse president ever. His governance is very poor and he does not think about the plights of Ghanaians,” she said.

She went on to detail the daily hustle she goes through to get by. According to her, she spends her meagre sales on transport and food leaving her with nothing to save at the end of the day.,

“Due to the hardship in the system, customers are unable to patronize our wares. We spend all that we make on transport and food. We are suffering.”