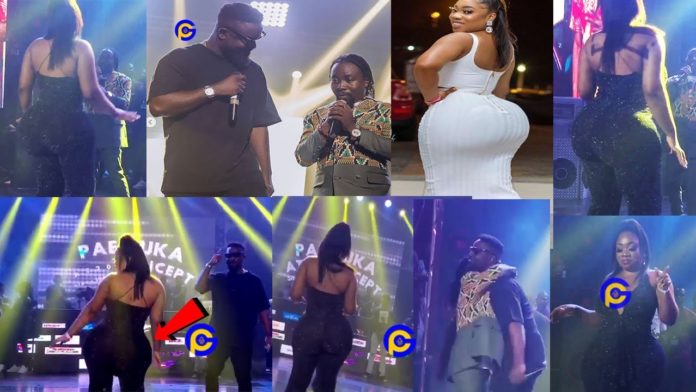 Ghanaian actress and Instagram slay queen Moesha Boduong has stated that she feels honored over the fact that her name has been used for a song by two legends.

The actress shared a video of the moment she was invited on stage by Obrafour and Sarkodie at the Pae Mu Ka Concert when they were performing their hit song dubbed “Moesha”.

Moesha Boduong who was very elated expressed joy adding how honored she felt after she was invited on stage by the two legends.

She wrote on Instagram; “PaeMuKaAt20 CONCERT ????about last night ?????so honored to have two legends use my name for a song ??
SONG TITLE: MOESHA. ARTIST Obrafour & Sarkodie”

The Pae Mu Ka Concert which was held over the weekend was to celebrate the legendary rapper Obrafour.

The fully packed event was graced by a lot of musicians, actors, actresses, and personalities.

There were also several stage performances from artists like Samini, Kwaw Kese, Reggie Rockstone, Sarkodie, and several others.

Share
Facebook
Twitter
WhatsApp
Previous articleMost of my songs are very deep, I hope to be celebrated just like Obrafour -Akwaboah
Next articleTV3 accused of robbing Enam off the winner of Ghana’ Most Beautiful 2019