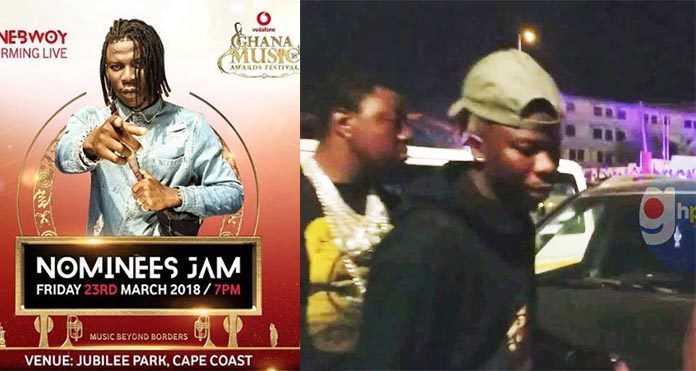 READ ALSO: Nothing can stop me from performing at the VGMA Nominees Jam – Stonebwoy fires

The ‘Bawasaba’ hitmaker was initially billed to perform at the bash, apparently without the consent of Zylofon Media, and he was kicked off after the company warned Charterhouse using him without their consent would lead to a lawsuit.

Stonebwoy had initially stated today that he would still be performing but a press release just sent out by Charterhouse has Stonebwoy’s name off the bill with Samini inserted instead.

But it seems dancehall artist, Stonebwoy, appears to have paid no mind to a press release by Zylofon Media to the effect that all persons seeking to book artistes signed up with the company must do so through Zylofon Media.

READ THIS: Video: Rufftown Records releases the official tribute to Ebony -You will cry watching it

Reports reaching Ghpage.com indicates that despite Stonebwoy been taken out of the list of artists to perform at the Jubilee Park in Cape Coast have been spotted at the scene of the venue.

There are obvious indications that the artiste who was seen with his team at the backstage is likely to perform tonight.

READ THIS TOO: “Stonebwoy Said I Have A Big Mouth And I Called Him A Cripple; Why Should I Apologise?”- Shatta Wale

Meanwhile, Stonebwoy is expected to perform at Ebony’s Tribute ongoing at the International Trade Fair Center and we can’t really tell if he will be back in time to perform.

There’s one question we ask; Is Zylofon Media aware of his presence at the Jubilee Park with rumours that he is set to perform? Stay put as we bring you the latest update on every development and happenings.

Weeks after we all thought the beef between Funny Face and his other colleagues has ended, Lil Win has thrown another shot.
Read more
Entertainment

Actor turned politician John Dumelo who is also aspiring to be voted in parliament as an MP for Ayawaso West constituency has...
Read more
Entertainment

Charlotte Osei lands a new job as a TV presenter

The former chairperson of the Electoral commission Mrs. Charlotte Osei has landed a job as a presenter on EIB networks GHOne TV.
Read more
Entertainment

Gospel singer Ohemaa Mercy according to reports going around is currently stuck in Nigeria months after her Tehillah Concert in the country.
Read more
Entertainment

Nana Akua Addo who is a recognised international model has been slaying Red Carpet event across the length and breadth of the...
Read more