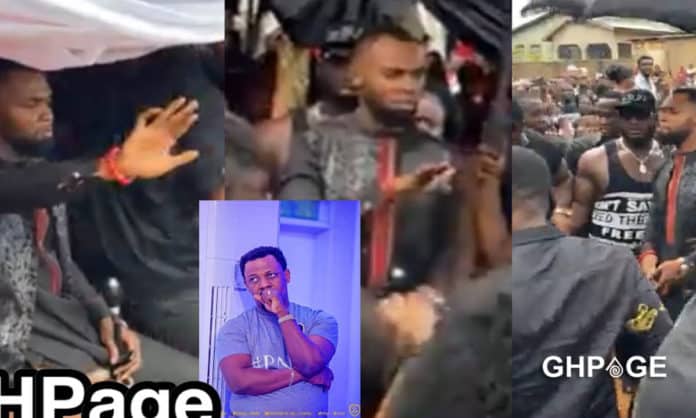 It was an atmosphere of unity when scores of prominent Ghanaian pastors showed up at the burial of the late father of Bishop Daniel Obinim, whose final funeral rites happened on Saturday, August 28, 2021.

The founder and leader of International God’s Way Church (IGWC) received lots of love from his colleagues following their arrival despite the rivalry between some of them in the Christian Ministry.

However, they appeared to have put their differences aside and thronged the venue to help Obinim lay his father to rest and also pay their last respects.

Among the pastors spotted at the funeral was Reverend Francis Kwaku Antwi, the founder and leader of Anointed Palace Chapel, who is popularly known as Reverend Obofour.

Obofour had a grand entrance at the funeral as he appeared with an umbrella over his head. After seeing some of his colleagues at the funeral, Obofour went on to exchange pleasantries with them before proceeding to take his seat.

Watch how Rev. Obofour stole the show with his arrival below

Prior to the funeral, Rev. Obofour had called Obinim on phone to confirm the date for the event – a gesture that sparked excitement among followers of both pastors who had some animosity between them.

The bold move by the former was interpreted by many as a peacemaking nod which was lauded by internet users.

The late James Kwadwo Bonsu who passed away in April after an illness was laid to rest at Abuakwa Sepaase near Kumasi.