Hypocrite Sarkodie betrayed me in a Glo deal -Shatta Wale 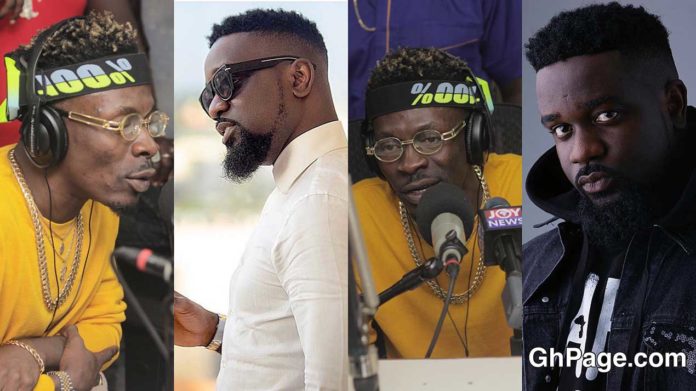 The Shatta Movement Boss, Charles Nii Armah Mensah popularly known as Shatta Wale has disclosed how his ‘beef’ with the Sarkcess boss started.

According to the ‘My Level’ hitmaker, he agreed with Sarkodie to charge a specific amount for a show they were both billed for but Sarkodie betrayed him and charged less.

ALSO READ: Rev Obofour went to beg Michy on my behalf but she didn’t mind us -Shatta Wale

Shatta Wale also described the BET award-winner as a hypocrite and that he is a living a poor lifestyle.

“Sarkodie behaves so hypocritically, he doesn’t want to come out and say the problem but he is suffering.

My problem with Sarkodie is about the Glo show organised last year. We were both billed for the show and we agreed to charge $150,000 but Sarkodie betrayed me and charged 120,000 cedis.

I confronted Sarkodie and told him that I will go and radio and let everyone know that he is leaving a poor life but doesn’t want anyone to know”, Shatta Wale disclosed.

The two ‘giant’ musicians used to be very good friends but it seems there is bad blood brewing between them.

Shatta Wale has on several occasions described Sarkodie as a poor artiste and also a hypocrite.

Sarkodie, in turn, stated that Shatta Wale is not a good friend for the numerous attacks on him.

In October 2018, Sarkodie released a diss track to Shatta titled ‘My Advice’ which went viral and got many Ghanaians talking.

The future of two of Ghana's biggest artistes Shatta Wale and Stonebwoy in featuring in the Vodafone Ghana Music Awards (VGMA)...
Read more