I dey come like knock out -Ghana2Pac threatens Shatta Bandle 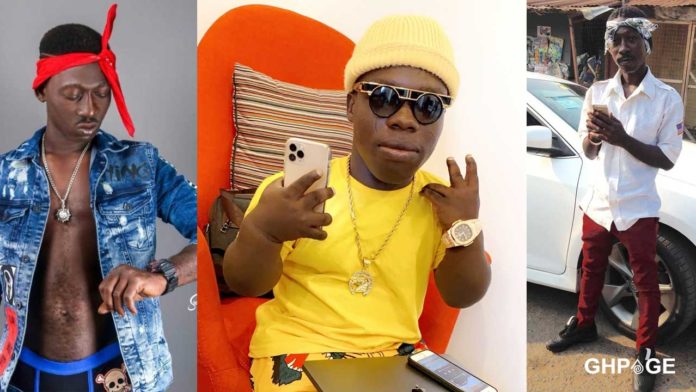 Popular social media sensation Ghana2Pac has resurfaced after going into hibernation for a very long time.

In a video sighted by Ghpage.com, Ghana2Pac also known as Supa threatened to knock out Shatta Bandle.

According to Supa, he is now back to take his throne as the King of the Street and popular internet sensation.

He further stated that he is no way bothered about the fact that Shatta Bandle was featured on Rude Boy’s song.

Supa added that he also has a song with Dj Khaled and Burna Boy’s girlfriend, Stefflon Don.

“I dey come like a knockout. Shatta Bandle, I go buy credit 5 cedis and bundle you cos you don’t have fame and you are too short. I here say you sing a song with P square me I feature Dj Khalid and Stefflon Don. F**k Shatta Bandle”, Supa threatened.

In recent times, Shatta Bandle has taken over social media after he bragged about being richer than Dangote.

The diminutive social media sensation had bragged about being the richest short man alive and has shown off huge sums of money, luxurious cars and houses to buttress his claims.

Ghana2Pac shot to fame after videos of him rapping went viral and was also retweeted by award-winning rapper Sarkodie.

The Nima-based rapper is not for his funny style of rapping, weird walking style, and his missing teeth.

His hilarious style sparked the Supa challenge where several celebrities including Funny Face, Samini and Sarkodie took part in it.