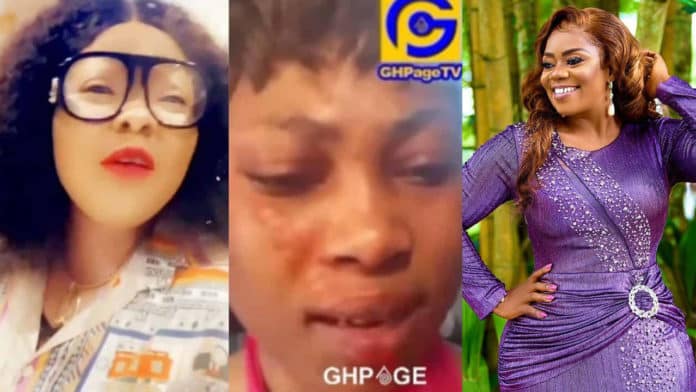 Ghanaian gospel diva Piesie Esther says she has reached out to Nana Agradaa with a humble plea to end her smear campaign on Joyce Blessing.

She made this revelation during an interview with Fiifi Pratt on Kingdom Plus FMon Tuesday where they spoke broadly on a variety on topic including Joyce’s recent expose.

She divulged that she has spoken to Nana Agradaa and urged her to forgive Joyce Blessing and stop slandering the gospel musician with her damning publications on social media.

Although she disclosed it was difficult to persuade the repented fetish priestess now called Evangelist Patricia Oduro, Piesie Esther indicated that she went ahead anyway and made her case.

Pieisie Esther intimated that even though there was no certainty that Nana Agradaa wouldn’t strike again, she gave her a listening ear as a woman who have ventured into the christian ministry of winning sould for christ.

Agradaa and Joyce don’t meet eye-to-eye and it all dates back to when the latter was accused of having an extramarital affair that resulted in the birth of two children that biologically did not belong to her husband.

On the back of this, Nana Agradaa – aka Evangelist Tupac started throwing shade at Joyce Blessing at the least chance.

As karma would have it, tables recently turned against Nana Agradaa as her husband also abandoned her to pursue his church ministry elsewhere despit his wife buying a churching building worth 9 billion cedis for him to start his own church.

Joyce jumped on this to ridicule Nana Agradaa for days until a video of her confessing her feelings to her supposed lover in a drunk state was leaked.

An effort to discredit the video was further made worse after her husband Dave Joy responded to a statement for Joyce’s management that claimed she sent the tape to him.

Although there seem to be calm at the moment, we cannot tell when the next strike from either party will come.